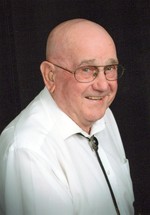 A lifelong resident of Missouri, Leroy attended the small country school in the area of Hale, Mo. After completing the 9th grade, he left school to work the family farm. Leroy enlisted in the United States Navy four days prior to having to register for the draft. He would smirk and tell you “I didn’t want to end up in the Army or Marines.” Leroy was able to serve his country alongside his brother, Delbert, on the (USS) PGM-332; a warship responsible for the oversite of nuclear weapons testing on naval warships.

After his military service he returned home to his family farm and quickly met Marjorie. The couple raised four beautiful children together, and through Leroy’s construction company they relocated to Jefferson City in 1969. Poire Construction Company operated in Jefferson City, Mo for many years until Leroy’s retirement.

Leroy was an active member of the St. Martin’s VFW. He and Marjorie attended Concord Baptist Church, where he was a charter member, deacon, and usher. He was truly a man of God, and would attribute all he had achieved in life to the Lord. Through his business and trade talents Leroy was able to build many additions and projects for the Concord Baptist community throughout the years; something he was truly proud of. It brings great peace to know he will be spending his birthday Sunday in the “Big Church” with his savior. Leroy was the last surviving WWII Veteran attending Concord Baptist Church.

He loved to fish, play cards, and spend time with his family. He was an avid baseball fan. Growing up in the Kansas City area, his first love was for the Kansas City Royals, but he later enjoyed watching the Cardinals as well. He followed MU Basketball, and could often be found watching a western in his downtime. In previous years he grew large vegetable gardens and always loved to can food. Leroy and Marjorie enjoyed traveling together, fishing in Canada and spending winters in Yuma. Leroy was able to travel with the Central Missouri Honor Flight to the WWII memorial in Washington D.C. This was a trip he would never forget and was truly glad he took. Leroy will be remembered most for his incredible work ethic, his strong opinions, and for his endless desire to help others. Leroy was a great man who lived a great life.

Leroy was preceded in death by his parents; his brothers, Delbert Poire, and Jessie Poire; and his son, Ronnie Poire.

Funeral services will be conducted at 11:00 am Tuesday, September 15, 2020 at Concord Baptist Church with the Reverend Dr. Monte Shinkle officiating. Graveside services with military honors will follow at Hawthorn Memorial Gardens. The general public is welcome to attend while following social distancing guidelines.

In lieu of flowers, memorials are suggested to Central Missouri Honor Flight or Concord Baptist Church.