To share your memory on the wall of Luramae Allen, sign in using one of the following options:

Print
Luramae Georgia Allen, age 88, of Jefferson City, Mo., passed away on Tuesday, August 4, 2020 at the home of her son with him lovingly by her side.

She was born on October 30, 1931 in Iberia, Mo., the daughter of Roy and Erma Jenkins For... Read More
Luramae Georgia Allen, age 88, of Jefferson City, Mo., passed away on Tuesday, August 4, 2020 at the home of her son with him lovingly by her side.

She was born on October 30, 1931 in Iberia, Mo., the daughter of Roy and Erma Jenkins Forester. She was married on December 9, 1949 at the First United Methodist Church in Jefferson City to Albert “Jack” Jackson Allen who proceeded her in death on May 11, 1997.

A lifelong resident of the Central Missouri area, Luramae was a 1949 graduate of Jefferson City High School. During her high school years, she participated in intramural girls’ basketball and volleyball. She was employed by Woolworth’s on High Street in Jefferson City.

Shortly after marrying Jack, he enlisted in the Air Force. They lived in San Antonio, Texas, and he was stationed in Biloxi, Mississippi. In 1953, he was stationed at Chicksands, near Bedford, England. In 1954, Luramae traveled across the Atlantic Ocean on the Queen Mary to join him. While in England, they made life-long friendships with other American couples.

While in Bedford, they welcomed their only child, Michael, in May of 1955. When Jack’s time in the Air Force was up, in November of 1955, they returned to make their home in Jefferson City. Jack and Luramae purchased their new home in 1958. Luramae lived in that home until her health required her to be moved to a care facility in 2018.

As a family, the three of them enjoyed auto racing and spent many Saturday evenings at the old Capital Speedway. They were also able to visit several NASCAR tracks.

One of Luramae’s greatest pleasures in life was gardening and working in her yard. Beautiful flowers were abundant in her yard, and they were very lovingly cared for. They were admired and appreciated by all who saw them.

Luramae’s pride and joy was her son Michael. They shared a passion for Mizzou Basketball and rarely missed watching a game. During Michael’s early childhood, she was a stay-at-home mom and sold Avon products. She enjoyed meeting and getting to know her clients and stayed in touch with many of them after she stopped calling on them in their homes.

After her retirement, she continued to enjoy working in her yard and with her flowers. One of her favorite past times was going to the boat and playing slots. She always had a great time and made lasting memories taking several trips to the boat with her friends.

Luramae was preceded in death by: her loving husband; her parents; one sister: Blanche Hartman; and two brothers: Bobby Junior Forester and Leroy Forester.

Visitation will be held at Freeman Mortuary from 10:00 to 11:00 a.m. Saturday, August 8, 2020. The general public is welcome to attend the visitation while following social distancing guidelines. Please stay 6 feet apart and avoid close contact. Anyone is welcome and encouraged to wear personal masks or other personal protective equipment while in attendance.

Funeral services will be held at 11:00 a.m. Saturday in the Freeman Chapel with the Reverend Melissa Dowling and the Reverend Danny Bryson officiating. Graveside services and interment will follow at Hawthorn Memorial Gardens.

A webcast of the funeral service will begin at 11:00 a.m. for friends that are not able to attend by going to her memorial page on Freeman Mortuary’s website. Friends may mail sympathy cards to the funeral home or leave condolences online to be given to her family.

In lieu of flowers, memorials are suggested to St. Jude’s Research Hospital.

To send flowers to the family or plant a tree in memory of Luramae Allen, please visit our Heartfelt Sympathies Store.

Receive notifications about information and event scheduling for Luramae

We encourage you to share your most beloved memories of Luramae here, so that the family and other loved ones can always see it. You can upload cherished photographs, or share your favorite stories, and can even comment on those shared by others.

Kimberly Spurgeon sent flowers to the family of Luramae Allen.
Show you care by sending flowers

Posted Aug 13, 2020 at 12:52pm
My deepest sympathy to the friends and family. I worked across the hall from Luramae from 1983 to her retirement in 1993. When we met each other in the hallway, we would often stop and visit for a bit. She was always friendly, and had a beautiful smile.

Posted Aug 08, 2020 at 07:36pm
Sorry to hear of Luramae’s passing. She and I graduated from high school together and my husband (Barney Sapp) was best man at their wedding. We remained friends through the years, and she was very special to me. Please accept my sympathies and know that I am holding your family in prayer as you grieve her passing. God bless you and your extended family. I am sorry to be unable to attend her memorial service. Betty (Sapp) Buescher.

Posted Aug 07, 2020 at 07:17pm
My condolences goes out to your family. I used to take care of Lauramae. She was always so close to me. And we would talk all the time about life. I just enjoyed seeing her everyday. You will be missed ❤️
Comment Share
Share via:
KS

Posted Aug 07, 2020 at 02:43pm
Tou will be sadly missed. Love you a bushel and a peck, And a hug around your neck. Love. Ronnie and Tina Allen and Randy and Kim Spurgeon

Kimberly Spurgeon purchased the The FTD Comfort Planter and planted a memorial tree for the family of Luramae Allen. Send Flowers

Posted Aug 06, 2020 at 12:14am
Deepest sympathies for Michael &family. Luramae was a beautiful soul my mom talked to me alot about her cousin Luramae. They are both in heaven now. Prayers &Hugs. Sincerely Judy McGowan
Comment Share
Share via: 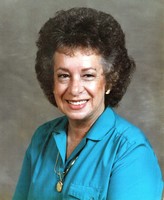