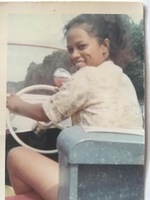 She was born on March 26, 1945 in Pago Pago, American Samoa, a daughter of Fa’ataualofa Salamasina Fetuli Taula from the village of Luatuanu’. Her family moved to California when Luse was sixteen, and she graduated from San Pedro High School in 1963.

Luse was employed as the food service manager with the Norton Air Force Base in San Bernardino, California for many years. During this time is when she met James Paul Gilmore. They married in Hawaii on February 11, 1967.

Luse had a big heart and was loyal to her family. She will be remembered for her warm welcoming spirit and joyous laughter. She enjoyed traveling with her husband and playing darts. She was passionate about her Samoan heritage and loved their traditional dances.

She moved to the Central Missouri area five years ago to be closer to her grandson.

She was preceded in death by her parents; her husband, James; and 17 brothers and sisters.

A private family service will be held at a later time in Hawaii.