To share your memory on the wall of Major General Frank Crooks, sign in using one of the following options:

He was born August 20, 1924 in St. Joseph, Missouri and attended public schools there. On March 15, 1947 in University City, Missouri, he was married to Jean A. Ronsick of University City.

He was a graduate of St. Joseph Junior College, attended the University of Missouri and received a BA degree from Columbia College. He was also a graduate of the Industrial College of the Armed Forces, the Air University Command and Staff College as well as numerous other service schools. After retiring from the military in 1984, he was employed as Military Assistant to the Adjutant General of Missouri and retired in 1990.

General Crooks was drafted into the Army Air Corps during World War II and served almost 40 years in the USAF and Air National Guard, obtaining the rank of Brigadier General. Upon retirement in 1984, due to an exemplary career in both the enlisted and officer ranks, he was advanced by executive order on the Missouri National Guard retired list to the grade of Major General. To date he is the only Air National Guard officer to have received this honor. He served in the European Theatre during World War II, ﬂying 60 combat missions in the B-26 Marauder aircraft as a top turret gunner/engineer. He was recalled to active duty during the Korean Conﬂict in 1951 and again during the Berlin Crisis in 1961 and served both tours of duty overseas. He participated in 5 major campaigns during World War II.

During his long career, he was awarded many Federal and State service ribbons and medals including the USAF Distinguished Service Medal, 14 Air Medals and the French Croix de Guerre with Palme. In 2011, the President of France appointed him a “Chevalier” of the French Legion of Honor for his service during World War II, the highest award bestowed by the French government for service in that country. He was a 32nd degree Scottish Rite Mason for over 50 years, a member of the Air Force Association, Military Officers Association of America, National Guard Association of the United States, Air Force Gunners Association, Phi Gamma Delta Fraternity, American Legion, and the Veterans of Foreign Wars.

In recent years, General Crooks was very proud to have donated the physical properties of his military career to the Museum of Missouri Military History where they are on display. As a member of The Greatest Generation, he was a true and humble patriot. He was deeply moved and grateful for inclusion in the Central Missouri Honor Flight excursion to Washington, D.C. which he felt was one of the most meaningful experiences of his life.

In addition to both high and unique achievement during his military career, General Crooks was a devoted, caring and loving husband, father, and grandfather. He will be missed by all who knew and loved him.

He was preceded in death by his wife of 68 years Jean Crooks and his son, Robert Crooks.

Visitation will be held at Freeman Mortuary from 10:00 a.m. until 11:00 a.m. on Saturday, October 24, 2020. The general public is welcome to attend the visitation while following social distancing guidelines. The family has requested that anyone in attendance wear a protective mask. Due to the current COVID-19 pandemic, his family will not be able to travel but friends will be able to visit with them virtually during the visitation.

Memorial services will be conducted at 11:00 a.m. Saturday, October 24, 2020 in the Freeman Chapel with the Reverend Chad Horton officiating. Major General Crooks will be entombed at a later date in Arlington National Cemetery.

A webcast of his memorial service will begin at 11:00 a.m. Saturday, October 24, 2020 for friends that are not able to attend by going to http://iframe.dacast.com/b/113049/c/475105 or by clicking on the "Memories" tab on this page then clicking on "watch webcast" Please remember to unmute the video to enable sound.

In lieu of flowers, those who wish, may make donations in honor of Major General Frank C. Crooks, to the Missouri Museum of Military History, 2405 Logistics Road, Jefferson City, Mo. 65101.

To send flowers to the family or plant a tree in memory of Major General Frank C. Crooks, please visit our Heartfelt Sympathies Store.

We encourage you to share your most beloved memories of Major General Frank here, so that the family and other loved ones can always see it. You can upload cherished photographs, or share your favorite stories, and can even comment on those shared by others.

Posted Oct 21, 2020 at 04:38pm
My father John C. Zuber worked with General Crooks at the MOANG as did I when I became old enough my dad always spoke very highly of General Crooks. Dad worked human very long time and had the honor to work with for a short time until he transferred to Jefferson City. All of the technicians always considered General Crooks as a guardian over the St. Louis Air National Guard Base and it's employees.
Comment Share
Share via:
JK

Posted Oct 19, 2020 at 01:31pm
"Oh My" so many good stories about Frank , never did I see him in a bad mood. He always had a kind word or a good ribbing! I always admired how he was interested in what I was doing and offered good words of encouragement. As a member of the greatest generation he wore the title well and he will be sorely missed in many ways. I am sure he is having a blast with Jeanie and Bob and running the show. Thanks for making my life better for knowing you...
Jay Klos
Comment Share
Share via:
L

Posted Oct 06, 2020 at 07:36pm
Please accept our condolences and heartfelt sympathy on General Crooks passing. He was a true patriot and loved his family and country. General Crooks was a kind and thoughtful man and was always fun in a social environment. May he Rest In Peace and be reunited with his beloved Jeanne.
Larry & Dana Henson Zimmerman
Comment Share
Share via: 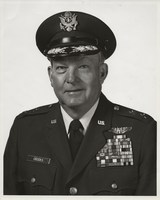