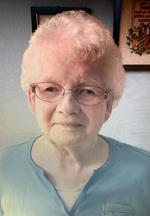 Margaret Bernice “Bea” Groves, age 92, of Jefferson City, Mo., passed away on Wednesday, November 4, 2020 at home with family by her side.

She was born on June 3, 1928 in Porter, Oklahoma, the daughter of Bertram and Elizabeth (Bristol) Bowd. She was married on October 1, 1949 in Corning, Arkansas to William Thomas Groves who preceded her in death on October 17, 2007.

She had lots of hobbies, some of which included quilting, sewing, crocheting, cross stitch, and plastic canvas. She loved to sing, especially the hymns from church. She had such a good memory, she could sing songs she had learned when she was a school girl. She was good at making up limericks and poems about family members and people she knew. She had a way with words and could tell you about them in the limericks.

Visitation will be held in Corning, Arkansas at Ermert Funeral Home from 10:00 am until 12:00 pm Saturday, November 14, 2020. Graveside services will follow at Richwoods Cemetery with Brent Newton officiating.