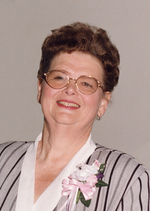 Margaret was a member of the St. Peter’s Catholic Church in Jefferson City.

She was the biggest fan of both of her daughters during their formative years. Whether it was room mom for a school party, a Girl Scout leader, “mom’s taxi” for running them to and from extra-curricular activities, or serving as Vice-President of the Jay Band Boosters, chaperoning competition trips and sewing color guard flags. Margaret cherished time with her family and would do anything for her beloved grandchildren.

She was preceded in death by her parents and her only brother, James Frederick Bemboom.

In lieu of flowers, memorial contributions are suggested to her grandchildren’s educational fund.