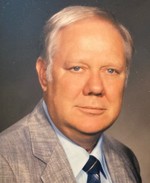 Martin was born on November 8, 1934 in Jefferson City, Mo. a son of Martin G.G. and Esther F.E. (Krueger) Beck. He was married on May 30, 1958 at Faith Lutheran Church in Jefferson City to Carol Lee Procter.

A lifelong resident of the central Missouri area, Martin was a 1952 graduate of Jefferson City High School and graduated from Jefferson City Junior College in 1954. He served in the United States Army Reserves from 1957 until he was honorably discharged in 1966.

Martin’s greatest gift in life was his abiding faith in our Lord. He was a charter member of Faith Lutheran Church where he served on the church board as president, vice president, secretary, and later as church elder. He sang in both the church mixed choir and male chorus. And though he had many gifts, the way in which the spirit most often used Martin was in his capacity as a teacher. Martin served his congregation by teaching Sunday school and confirmation classes, and for 35 years, he served as a bible study leader for the Colson Prison Fellowship program. He also served as a Scout Master for Faith Lutheran’s Boy Scout Troop 13.

Consistent with his passion for caring for others, Martin was employed for 35 years by the Family Support Division of the Missouri Department of Social Services. There, he worked to ensure that the children of Missouri were cared for and given the support and resources they needed to be successful in life. He worked various information technology jobs throughout his career, retiring in November of 1994 as a programming analysis supervisor.

Among the greatest joys in Martin’s life were his family. He was an amazing husband, father, and grandfather. After his retirement, Martin’s new “job” became loving, spending time with, and helping raise his grandchildren. Whether on a trip to Memorial Park or to the Grand Canyon, he enjoyed any time he got to spend with them.

Perhaps the way that Martin touched the lives of others most, especially the lives of his family, were his encouragement to love and serve the Lord, to care for others, and, most importantly, to “be kind like Papaw (and Emily [and sometimes Nicholas]).”

He was preceded in death by his parents and one brother, Clifford Beck on June 4, 2013.

Visitation will be held at Faith Lutheran Church from 10:00 a.m. until 11:00 a.m. Saturday, March 13, 2021. The general public is welcome to attend the visitation and the family has requested anyone in attendance wear a protective mask.

Funeral services will be conducted at 11:00 a.m. Saturday, March 13, 2021 at Faith Lutheran Church with the Reverend Eric Gledhill and the Reverend Mark Nebel officiating. Graveside services and interment will be held at Enloe Cemetery in Russellville, Mo.

A webcast of his service will begin at 11:00 a.m. Saturday for friends that are not able to attend by going to the "photos and videos" tab of this page and scrolling down to the webcasting link. Please click the speaker button at bottom of page to enable audio.

In lieu of flowers, memorial contributions are suggested to Faith Lutheran Church, 2027 Industrial Drive, Jefferson City, Mo. 65109 to help with their youth programs.

Mr. Beck’s full obituary will be posted to his memorial page on the funeral home website on Thursday afternoon and published in Friday’s News Tribune.