To share your memory on the wall of Mary Ann Headley, sign in using one of the following options:

She attended St. Peter’s elementary and high schools, graduating in 1951.

Mary Ann worked at Commercial Credit for seven years, then at various short-term jobs until she began working for the Missouri National Guard Credit Union in 1964, retiring in 1992 as Vice President. She was an in-home caregiver from 1993 until 2000.

Mary Ann enjoyed traveling. She explored much of North America and went on an excursion through Europe, with her favorite stop being Rome. She loved animals, had pets all her life, and followed the Decorah Eagles. She was an avid reader and a fierce card player, especially bridge. She was a major sports fan, following the St. Louis Cardinals and St. Louis Blues. She loved making others laugh and serving good food to friends and family. She tried to always remember and celebrate birthdays and often sent cards for other occasions. What she cherished the most was spending time with her family, friends and “bridge girls” who became her extended family.

In lieu of flowers, memorial contributions are suggested to the Raptor Resource, www.raptorresource.com
Read Less

To send flowers to the family or plant a tree in memory of Mary Ann Headley, please visit our Heartfelt Sympathies Store.

Receive notifications about information and event scheduling for Mary Ann

We encourage you to share your most beloved memories of Mary Ann here, so that the family and other loved ones can always see it. You can upload cherished photographs, or share your favorite stories, and can even comment on those shared by others.

Posted Apr 09, 2019 at 12:08pm
May time heal your sorrow
May friends ease your pain
May peace replace heartaches
And may warmest memories remain.
Rest in peace, Mary Ann Headley.

Posted Apr 08, 2019 at 06:24pm
Mary Ann was one of my favorite bridge friends - never a complaint when her hearing and eyesight started to fail her. I loved playing with her and being around her - such a positive person. Sherry
Comment Share
Share via:
DB

Posted Apr 08, 2019 at 02:19pm
So sorry to see that Marry Ann has passed away....she was always such a sweet & thoughtful person! My thoughts,prayers & sympathy are with you all...Debbie B.@H.C.
Comment Share
Share via: 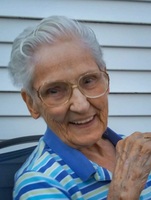