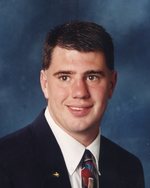 He was born on October 22, 1976 in Jefferson City Mo., the son of Jerry and Teresa (Kliethermes) Ferguson.

He was employed with Delong’s Incorporated working in the painting department, painting steel bridge beams and girders.

Matt had a love for the outdoors, whether he was fishing, hunting, searching for mushrooms, doing farm work or riding country roads, he was at home in nature. He had a great sense of humor and, from the time he was a boy, he loved playing pranks on friends and family. Matt was an avid sports fan, especially loved rooting for the Kansas City Chiefs and St. Louis Cardinals. Matt will always be known for his big heart, giving nature and approachable demeanor. The old saying “he never met a stranger” was absolutely true of Matt; he greeted all with a smile and was willing to do anything he could for others. Matt was cherished by all who knew him and will be greatly missed by his loving family.

A celebration of life service will be conducted at 7:00 pm Thursday, October 3, 2019 in the Freeman Chapel.

In lieu of flowers, memorial contributions are suggested to the Matthew Ferguson Memorial Fund.