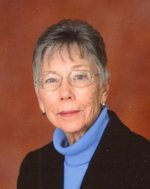 Mauda grew up in Campbell, Mo. and was proud to be crowned the first “Peach Queen”. She graduated from Campbell High School and went on to earn a bachelor’s degree in home economics from the University of Missouri in Columbia, Mo.

She possessed a strong faith and was a member of Grace Episcopal Church in Jefferson City. She also volunteered her time helping out with the Newcomers Group and X Club.

Mauda cherished time with her family, especially traveling and fishing with them. Some of her favorite family trips were to the state of Michigan when her kids were younger. During her free time, she was an avid bridge player and loved fishing at the Lake of the Ozarks.

She was preceded in death by her parents; two husbands; a great-granddaughter, Leilani Decker; and a step-daughter, Loisa McGeorge.

A memorial service will be conducted at 11:00 a.m. Saturday, January 12, 2019 at Grace Episcopal Church with the Reverend Ian Lasch officiating. A visitation will be held immediately following the service in the fellowship hall of the church.