To share your memory on the wall of Maxine Hall, sign in using one of the following options:

Maxine was born on August 16, 1920 in Oakland, IL the daughter of William Ernest Tallmadge Foltz and Lucy Irene (Pedigo) Foltz. She was married on April 4, 1942 in Oakland, IL to Eugene “Gene” Annin Hall, who preceded her in death on July 3, 1969.

Maxine was a 1938 graduate of Oakland High School in Oakland, IL. After graduation, she went to Cosmetology School in Decatur, IL where she became a licensed cosmetologist.

Maxine was the Deputy Treasurer for the Douglas County Treasurer’s Office in Tuscola, IL for over 30 years, and was still helping with tax season in their office at 85 years old. Through the years, she also was a bookkeeper with Empire Gas, Seaboard Finance, and Red Ball Trucking Company.

In addition to her diligent career as a bookkeeper, Maxine was a proud member of the First Methodist Church in Tuscola and a dedicated member of the Order of Eastern Star for over 65 years. She served as the Grand Chapter Representative to Iowa during the mid 1980’s and treasured those years of traveling to Eastern Star official visits, attending other ceremonious Grand Chapter events, as well as visits to local chapters throughout the states of Illinois and Iowa. She relocated to Jefferson City 15 years ago to be closer to her children. The First Presbyterian Church then became her “home” church. She was active in Presbyterian Women and the Faith Circle Bible Study.

Maxine was a true testament to being a hard worker; surviving the trials and tribulations of growing up during the Great Depression inspired a level of independence and conservative practices in Maxine that her children always admired. Those who knew Maxine knew she was a loving and witty lady who had an infectious laugh with a smile that warmed your heart. She could always be counted on for her honesty—solicited or not.

She was a woman of many talents. As a skilled seamstress she was able to make many of her children’s outfits including Jeannine’s wedding dress. Maxine also enjoyed knitting, smocking her granddaughter’s infant dresses, reading books by Danielle Steele and John Grisham, but her favorite past-time was babysitting her grandchildren as often as she could. She truly cherished any time spent with family, especially road trips to visit her granddaughter in North Carolina and never missing the annual Hall Family Reunions each August.

Survivors include: two children, Jeannine Toomey (husband, Mark) of Jefferson City, Mo. and Rodney Hall (wife, June) of Staunton, IL; three grandchildren, Bevin Stokes (husband, Brandon) of Burgaw, NC, Grant Toomey of Jefferson City, MO, and Matt Hall of Effingham, IL; three great-grandchildren, Gracie Mae Hall, Riley Eugene Hall, and Ari Jane Hall; and her nieces and nephews and many family friends. As an only child, Maxine truly cherished her husband’s side of the family for making her one of their own.

She was preceded in death by her parents; her husband, Gene, of 27 years; and an infant son, Michael Eugene.

An Order of the Eastern Star service, under the auspices of Victoria Chapel No. 14, will be held at 10:00 a.m. Saturday, July 18, 2020 at First Presbyterian Church with a visitation following at the church until 11:00 a.m.

A Celebration of Life Service will be conducted at 11:00 a.m. Saturday, July 18, 2020 at First Presbyterian Church with the Reverend Dr. David Henry and intern Alice Wilson officiating. A recording of her memorial service will be placed on this memorial page by Tuesday, July 21, 2020.

Private graveside services will be held at Oakland Cemetery in Oakland, Il.

To send flowers to the family or plant a tree in memory of Maxine Hall, please visit our Heartfelt Sympathies Store.

Receive notifications about information and event scheduling for Maxine

We encourage you to share your most beloved memories of Maxine here, so that the family and other loved ones can always see it. You can upload cherished photographs, or share your favorite stories, and can even comment on those shared by others. 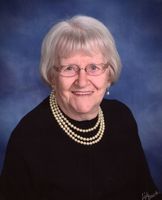