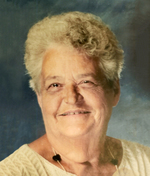 Nelda Louise Hutinger, age 77, of Centertown, Mo., passed away Tuesday, November 17, 2020 at Boone Hospital in Columbia, Mo. due to complications from COVID.

A lifelong resident of the central Missouri area, Nelda was a 1960 graduate of Jefferson City High School. During high school she was a member of the Swing Teens Band, where she played the accordion. She went on to attend Lincoln University.

Nelda had a passion for technology and was gifted in her knowledge of computer coding. She worked for the Missouri State Library where she was a computer information specialist until her retirement in 1993.

She had a competitive spirit and played bingo at many VFW halls around this area. Nelda was an avid reader, mostly historical romance books, always enjoyed a good western movie starring John Wayne, and never turned down a trip to the casino. She played pool and billiards frequently when she was younger. She even traveled with her billiard’s team to Las Vegas for the APA National Tournament and placed 3rd for her division.

Nelda’s happiest times were always with family and she was blessed to have many hobbies to enjoy with them. She would take her grandchildren on a trip every year and knew enough about technology to enjoy all the computer games with them. She looked forward to a good road trip; traveling to Arizona, Yellowstone, Florida and Texas with her little schnauzer as a companion. Memories outdoors were always her favorite, especially camping and fishing with her friends and family.

She will be remembered for her independent nature, strong personality and her wonderful sense of humor.

Nelda was preceded in death by her parents; her husband of 35 years, John; and two sisters, Edrie Campbell and Peggy Ann Armstrong.

Visitation will be held from 10:00 a.m. until 11:00 a.m. Tuesday, November 24, 2020 at Freeman Mortuary. The family has requested that anyone in attendance to wear a protective mask.

Funeral services will be held at 11:00 a.m. Tuesday, November 24, 2020 in the Freeman Chapel with Reverend Michael Hearst officiating. Graveside services and interment will follow at Hawthorn Memorial Gardens.

A webcast of her service will begin at 11:00 a.m. Tuesday for friends that are not able to attend by going to the "photos and videos" tab of this memorial page and scrolling down to the webcasting link.

In lieu of flowers, memorial contributions are suggested to the American Lung Association at 55 W. Wacker Drive, Suite 1150, Chicago, Il. 60601. Friends may mail sympathy cards to the funeral home or leave condolences online to be given to her family.