To share your memory on the wall of Nellie Sundermeyer, sign in using one of the following options:

Nellie was born on April 14, 1934 in Jefferson City, Mo., the daughter of Charle... Read More
Mrs. Nellie Josephine Sundermeyer, age 86, of New Bloomfield, Mo., passed away on Wednesday, September 30, 2020 at home, surrounded by her loving daughters.

Nellie was born on April 14, 1934 in Jefferson City, Mo., the daughter of Charles Shepard and Mary (Shackelford) Baldwin. She was married on March 19, 1951 in Arkansas to Paul Sundermeyer, who preceded her in death on January 11, 1997.

Right out of school, Nellie started her 38-year career at Von-Hoffman Press, where she worked in the Bindery department. After retirement, Nellie could not sit still. She worked for 5 years at Oak Tree Villa in Jefferson City in housekeeping.

Nellie stayed involved in her community through the American Legion. She also was a donor for many years at St. Jude’s Children’s Hospital.

Nellie was a go-getter. She enjoyed reading, traveling, playing cards, going shopping and sight-seeing, and she was an avid bowler. Nellie liked being outside, working in her yard, and gardening. Nellie loved Christmas time, always hosting big gatherings. She prepared the best fried chicken and potato salad. Most of all, Nellie’s family was her life. She was her children and grandchildren’s biggest cheerleader. She never missed a ball game or event that they had going on. Some of Nellie’s fondest memories with her family were at barbeques, holiday and family gatherings, pool parties, and various sporting events.

Everyone who met Nellie loved her. She will be most remembered for her free spirit, her caring nature, and her loving heart. Nellie will be greatly missed by all.

Visitation will be held at Freeman Mortuary from 10:00 A.M. until 12:00 P.M. Tuesday, October 6, 2020. Funeral services will be conducted at 12:00 PM Tuesday in the Freeman Chapel with Chaplain Bill Barkman officiating. Graveside services will follow at Hawthorn Memorial Gardens. The general public is welcome to attend her services while following social distancing guidelines.

A webcast of the funeral service will begin at 11:45 A.M. for friends that are not able to attend by going to her memorial page on Freeman Mortuary’s website. Friends may mail sympathy cards to the funeral home or leave condolences online to be given to her family.

In lieu of flowers, memorials are suggested to St. Jude Children’s Research Hospital or the American Lung Association.

To send flowers to the family or plant a tree in memory of Nellie Josephine Sundermeyer, please visit our Heartfelt Sympathies Store.

Receive notifications about information and event scheduling for Nellie

We encourage you to share your most beloved memories of Nellie here, so that the family and other loved ones can always see it. You can upload cherished photographs, or share your favorite stories, and can even comment on those shared by others.

Posted Oct 04, 2020 at 02:41pm
I wish to extend my deepest sympathy to the family and friends of Nellie Sundermeyer. I worked with Nellie and her sisters at Von Hoffman. My prayers be with you.
Comment Share
Share via:
HS

Flowers were purchased and a memorial tree planted for the family of Nellie Sundermeyer. Send Flowers

Flowers were purchased for the family of Nellie Sundermeyer. Send Flowers 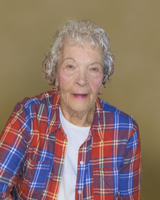