Obituary for Patricia A. Clark 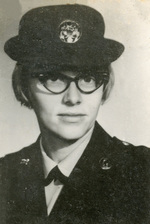 Pat served in the United States Army from 1968 until 1969. She later became a member of the Missouri Army National Guard and served for over 22 years until her retirement on August 23, 1979.

She enjoyed puzzles, reading books, and walking her dog.

Graveside services and interment with military honors will be conducted at 2:00 p.m. Thursday, December 27, 2018 at Riverview Cemetery with the Reverend Dr. Doyle Sager officiating.