To share your memory on the wall of Paula Carter, sign in using one of the following options:

Provide comfort for the family of Paula Carter with a meaningful gesture of sympathy.

She was married on December 29, 1951 in Jackson, Tn. to Harold Gene Carter, who preceded her in death on January 9, 2019. After 67 years of marriage, Harold and Paula are reunited in Heaven after only 78 days of being apart.

Harold and Paula moved to Richmond, Mo. where Paula became an art teacher at Richmond High School (1952-1954). They later moved to Kansas City and that is when she had the opportunity to be a creative designer for Hallmark Cards to help design different greeting cards (1954-1957). Once Harold and she started a family, Paula became a homemaker until she became Harold’s receptionist for the three years before his retirement in 1992 from dental practice.

Paula’s main passion in life was being a loving wife, mother and grandmother. She was selfless in taking care of her family and being their biggest cheerleader. She supported all her kids in their activities growing up, becoming a Girl Scout Leader and driving them continually to all their practices and games. She never missed any of her grandchildren’s sporting events attending numerous softball, baseball, soccer, basketball and football games. Some of her favorite memories were the joy of family gatherings and cooking for her entire crew at Sunday dinners. She loved to try new recipes and truly became a gourmet cook.

Paula cherished traveling and could be talked into going anywhere on a whim. She cherished her trips to Italy, Greece, beach trips in Mexico, skiing in Colorado, boating at the Lake of the Ozarks, floating the scenic rivers of Missouri, and sailing in the Virgin Islands. She grew up in Tennessee and always appreciated visiting her family at their cabin on the Tennessee River. Many times it was quick day trips with family and close friends.

Paula was a gifted artist and enjoyed playing bridge. Golf was a sport the entire family enjoyed and Paula treasured playing with family and friends. While wintering in Florida, she was known to play golf numerous times in a week and attended golf schools with her daughter, Cathy, in Alabama and Florida.

With her outgoing personality, Paula was involved with numerous organizations. She was a 50 plus year member and past president of P.E.O., Chapter JB. She was a past president of the Central Missouri Dental Society Auxiliary, a proud member of the Gamma Phi Beta Sorority, First United Methodist Church and the Memorial Hospital Auxiliary. With her love of golf, she was a longtime member of the Jefferson City Country Club where she participated in the Jefferson City Country Club Ladies Golf Association, Missouri Women’s Golf Association, and Missouri Senior Women’s Golf Association.

She was preceded in death by her parents; her loving husband, Dr. Harold Carter; one brother, Jim Ross; and one grandson, Nathan Ross Carter.

Funeral services will be conducted at 11:00 a.m. Saturday, April 6, 2019 in the Freeman Chapel with the Reverend Dr. Stephen Buchholz officiating. Graveside service and interment will follow at Riverview Cemetery.

We encourage you to share your most beloved memories of Paula here, so that the family and other loved ones can always see it. You can upload cherished photographs, or share your favorite stories, and can even comment on those shared by others.

Krystal Conm, Hugs, Pamela Gibbs-Hunter & family, and others have sent flowers to the family of Paula Carter.
Show you care by sending flowers

Posted Apr 13, 2019 at 12:18pm
Hope, Brion and family, I am so sorry to hear of your mother's passing. I know it must be especially tough after just losing your father. Yet what beautifully lived lives that they are back together again smiling down from heaven. Find comfort in all the memories that will forever keep them close to you. With deepest condolences, Cheryl Beatty
Comment Share
Share via:
CK

Posted Apr 03, 2019 at 10:00am
Cathy, Hope, Ross and family.
I am very sorry for the loss of your mother.
I can't imagine what you are going through with losing both parents
this close together. Loved your mom and dad, always smiling and kind,
I worked across the hall at Dr. Thompsons office. Prayers
Carol Kuensting-Lochhead
Comment Share
Share via:
KC

Posted Apr 01, 2019 at 11:34am
Cathy, Hope and Ross, so very very sad to see the passing of your sweet mother. Many wonderful memories growing up in good ole Schellridge years ago. Loved her so much and always enjoyed visiting with her in the past years. Beautiful lady inside and out! She will be greatly missed by all those that were blessed to know her! Deepest sympathy to you all, love and hugs. Annie Jarrett 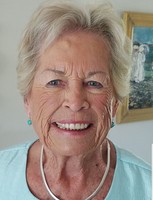