To share your memory on the wall of Pinkie Carrender, sign in using one of the following options:

Provide comfort for the family of Pinkie Carrender with a meaningful gesture of sympathy.

Print
Pinkie Ann Carrender, 78, of Henley, Missouri entered into the presence of the Lord on September 30, 2019. Pinkie spent her final days surrounded by family, who loved and cherished a lifetime of memories.

She was born September 7, 1941 i... Read More
Pinkie Ann Carrender, 78, of Henley, Missouri entered into the presence of the Lord on September 30, 2019. Pinkie spent her final days surrounded by family, who loved and cherished a lifetime of memories.

She was born September 7, 1941 in Jefferson City. Pinkie was the daughter of Clellan Mancer and Dora Ellen (Finn) Bias. She was married on August 15, 1960 to Billy Joe Carrender, who passed away on January 21, 1986.

As a young child, Pinkie enjoyed going to church with her mother. She was active in the Pentecostal Young People Association (PYPA), several times winning the annual Bible talent competition. When Pinkie was in the sixth grade she won 50 dollars in the Jefferson City marble championship. She was proud to share her winnings with her mother, shopping for much needed food for the family. As a teenager, Pinkie loved music and dancing, which led to her lifelong love of Elvis Presley.

Pinkie attended Jefferson City High School. She worked as an income tax preparer for 37 years at H&R Block. Pinkie also owned her own tax service for many years. Friends and family knew her to be a very outgoing woman who enjoyed life and loved to laugh. Her many interests included hunting, fishing, gardening and card games. She enjoyed the love and companionship of her pets, especially her beloved dog, Missy.

Pinkie was preceded in death by her parents; her husband, Billy Joe; her longtime companion, Ellroy Steenburgen; her sister, Hazel Welschmeyer; and her half-brother, Delbert Bias.

Visitation will be held at Freeman Mortuary from 3:00pm until 7:00 pm Thursday, October 10, 2019.
A memorial service will follow at 7:00pm in the Freeman Chapel. Reverend Lowell Perkins will officiate.

In lieu of flowers, Pinkie and her family suggest donations be made to Pinkie’s Grandchildren’s Educational Fund.

We encourage you to share your most beloved memories of Pinkie here, so that the family and other loved ones can always see it. You can upload cherished photographs, or share your favorite stories, and can even comment on those shared by others. 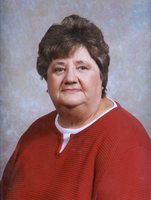