To share your memory on the wall of Raymond Hicks, sign in using one of the following options:

He worked as a Manager for Business Opportunities for Missouri Blind for 39 years, and retired in November of 2019.

Raymond loved to spend time with his family. He enjoyed fishing, playing cards, watching westerns and traveling. His family smiles in remembrance of his favorite meal consisting of a hamburger, well done, with no onions, French fries with no skin, and a diet coke. He impressed people with his abilities to determine the size of a wrench needed by just feeling the size with his fingers. Raymond was an ornery man, who enjoyed joking around and practical jokes, especially with his grandson, Tyler. But he was also a dedicated husband and father who was always there. He had an ability to strike up a conversation with anyone and could often be found sitting on a bench chatting with friends and strangers alike. His wife cherishes many vacations all over the country with him.

He was preceded in death by his parents and one sister, Carol Jennings.

Raymond’s wishes were to be cremated and have a private celebration of life at a later time.

To send flowers to the family or plant a tree in memory of Raymond Hicks, please visit our Heartfelt Sympathies Store.

Receive notifications about information and event scheduling for Raymond

There are no events scheduled. You can still show your support by sending flowers directly to the family, or planting a memorial tree in memory of Raymond Hicks.
Visit the Heartfelt Sympathies Store

We encourage you to share your most beloved memories of Raymond here, so that the family and other loved ones can always see it. You can upload cherished photographs, or share your favorite stories, and can even comment on those shared by others.

Posted Nov 09, 2020 at 12:02am
Me and my family have known Raymond and his family for over 30 years and have given us so many great memories. We were neighbors in the late 80s. They were the best neighbors anyone could ask for. I can remember when I was young they would take my family to a pizza place called Cecil Whitaker's and we would have the greatest time everytime. They were so special to me and my family. They always made sure we were ok . No matter what the situation they had a way to make us smile. Raymonds passing had a great impact on me and my family's life, but I know as good as him and his family was to everyone God will take great care of him Raymond will be forever missed and loved by me and my family

Posted Oct 23, 2020 at 11:18am
Dear Sharon
Im sorry for your loss.He was always smiling and such a sweet man.
Prayers and hugs.
Comment Share
Share via: 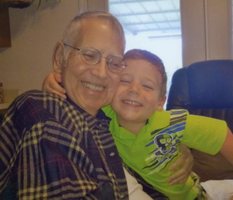 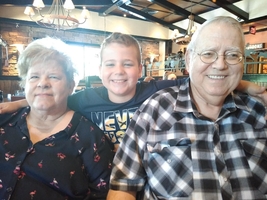