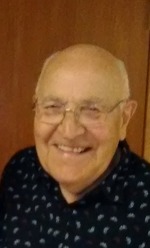 Rick was born on October 18, 1938 on the family farm in Taos, Mo., the son of Joseph and Johanna (Forck) Grothoff. He was married on September 30, 1961 at Immaculate Conception Catholic Church in Jefferson City, Mo. to Irene Shelley who survives at the home.

A lifelong resident of the Central Missouri area, Rick was a 1956 graduate of Fatima High School. After high school, Rick enlisted in the United States Army and proudly served before being honorably discharged in 1959.

Rick worked as a plumber for various companies before he was hired on with Harold G. Butzer. In 2001, he retired following his 20-year career with them.

Rick was a member of Plumbers and Pipefitters Local 562 and the American Legion, Roscoe Enloe Post 5.

Rick was a family man. He especially loved helping, visiting, and spending time with his family. His wife will cherish her memories of them dancing together as well as watching cardinal baseball games. Rick never met a stranger; he saw someone he knew everywhere he went and made it a point to stop to catch up and have a conversation.

Rick was preceded in death by: his parents; one son, Kenneth “Kenny” Grothoff; three brothers; and two sisters.

Visitation will be held from 10:00 am until 11:30 am Monday, October 26, 2020 at Freeman Mortuary. The general public is welcome to attend the visitation while following social distancing guidelines. Please stay 6 feet apart and avoid close contact. Anyone is welcome and required to wear personal masks or other personal protective equipment while in attendance.

Funeral services and military honors for Rick will be conducted at 11:30 am Monday, October 26, 2020 in the Freeman Chapel with Deacon Ray Purvis officiating. Rick will be entombed at Hawthorn Memorial Gardens.

A webcast of the funeral service will begin at 11:15 am Monday, October 26, 2020 for friends that are not able to attend by going to his memorial page on Freeman Mortuary’s website. Friends may mail sympathy cards to the funeral home or leave condolences online to be given to his family.

In lieu of flowers, memorial contributions are suggested to the Samaritan Center.