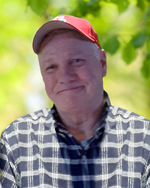 A lifelong resident of the Central Missouri area, Ricky was a 1973 graduate of Jefferson City High School.

Ricky was a jack of all trades. He worked as a stone mason, construction worker, and did maintenance at a golf course. As a gifted artist, his favorite position was making custom picture frames and professionally framing pictures. He worked as a picture framer in Ben Franklin and Amber’s retail stores and was extremely talented in this task as well as creating art of his own.

Ricky loved his close-knit circle of family. He enjoyed the outdoors, and could often be found fishing, camping, and boating with his family at Pomme de Terre. Ricky was a grill master and loved having a good BBQ with his family. He taught his son, Ian, many things about the outdoors and life in general that he will cherish. Ricky was an avid St. Louis Cardinals fan, and rarely missed a game. Ricky was a believer and was a member of the Baptist faith.

Ricky was preceded in death by his parents.

Private services will be held by the family at a later date.

Memorial Contributions are appreciated to the charity of the donor's choice.