To share your memory on the wall of Robert Jackson, sign in using one of the following options:

He was born on August 3, 1953 in Jeffersonville, Indiana the son of Robert Sidney ... Read More
Robert Steven “Stonewall” Jackson, 66, of St. Thomas, Mo. passed away Thursday, February 20, 2020 at the River City Nursing and Rehabilitation Center.

He was born on August 3, 1953 in Jeffersonville, Indiana the son of Robert Sidney and Barbara Jean (Wolfe) Jackson.

Stonewall has lived in various states, mostly Florida and Missouri. He loved riding motorcycles, his prized possession was his Harley Davidson three-wheeler. He was a lifetime member of the “Freedom of the Road Riders” and he enjoyed going to motorcycle and car races. He would paint saw blades then take them to races to have drivers, the racing team and pit crews sign them. For many years, on most Tuesdays he could be found at Curt’s Motorcycle shop assisting Curt and having lunch with other bike enthusiasts.

Stonewall held various jobs throughout his lifetime, including construction, cabinet work, roofing and mechanics. There wasn’t anything he couldn’t do when he put his mind to it.

Stonewall was a jack of all trades in his occupations as well as his hobbies. He recycled and repurposed various items and made sure he caught his favorite movies and shows by taping and cataloging them. He acquired a large collection of Budweiser items and collected “The Three Stooges” memorabilia. He was gifted in making wood and leather crafts and was an avid water skier. Stonewall was a great fisherman and held fish fries for family and friends. He will be remembered for his unique personality and sense of humor.

During his adult life he had two Doberman pincher dogs, Fang and Ripper. He even had Ripper mounted and he sat in the living room.

Stonewall was a United States Marine, as was one of his brothers, Michele Lee Jackson. Michele preceded him in death during the Vietnam War. Stonewall was very close to and also incredibly proud of him. He lived his life as a true patriot all the way to the end.

A Celebration of Life will be held from 12:00 until 2:00 pm Saturday, February 29, 2020 at Freeman Mortuary, with remembrances from family and friends held at 2:00 pm. Graveside services with military honors will follow at Hawthorn Memorial Gardens.

To send flowers to the family or plant a tree in memory of Robert Stonewall Jackson, please visit our Heartfelt Sympathies Store.

Posted Feb 25, 2020 at 09:43pm
It pains me to bid a fond farewell to a dear ol friend from the early 80's down in Miami. While stationed at Homestead AFB I became friends with Stonewall which turned out to be a almost 40 year friendship. We all parted ways 83 or so...but continued to stay in touch. He was invited to my Air Force Retirement Ceremony, but respectfully decline as he said his casual would not fit in on a Air Force bace plus he said he likes to cut loose...and that wouldn't be good either. I thank him for all the special times and memories. You will be missed and talked about for years to come. God Bless you and I'll see you on the other side. Rug
Comment Share
Share via:
AI

Posted Feb 24, 2020 at 04:32pm
Please accept our most heartfelt sympathies for your loss... Our thoughts are with you and your family during this difficult time.

Posted Feb 22, 2020 at 04:09pm
Donna, I'm so sorry for your loss. You took such good care of Robert and did so much for him. Robert was one of my favorite patients when I worked at the DME provider. My thoughts and prayers are with you and yours. Kim Burnham
Comment Share
Share via:
DP

Thank you so much for your kind words. He was a very special brother. Donna 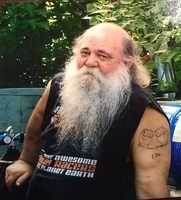