To share your memory on the wall of Robert Johnson, sign in using one of the following options:

Robert was born on February 19, 1951 in Albuquerque, NM. the son of Robert C. and Patricia L. (Donaldson) Johnson. On February 18, 2000, he finally got to marry the love of his life, Janet Armstrong after 28 years of meeting, they had a very “special relationship”, who survives at the home.

A lifelong resident of the Central Missouri area, Robert was a 1969 graduate of Jefferson City High School. After graduation, Robert took college courses at Lincoln University.

Robert was employed with Employment Security and Economic Development where he did clerical work until his retirement in 2005.

Robert was truly a unique person and he always had a smile on his face. He never failed to make you smile with one of his witty comments or sincerely convincing stories. Robert was highly intelligent and he loved history making him a fountain of knowledge on many subjects. Robert enjoyed watching football and baseball. He loved playing fantasy baseball with friends. He often entertained his friends and family at home with BBQ’s and fish fry’s. He will be greatly missed by all who knew and loved him.

They say it always rains when a good man dies. Well one died today. Robert, I will miss you more than words can describe. You were uniquely you and I loved you dearly. No girl could have asked for a better step-dad. We had a double rainbow at the house today just for you.

Robert was preceded in death by his parents; his grandparents; mother-in-law, Clara Mae Landers; father-in-law, Art Landers; and numerous pets.

A Celebration of Robert’s Life will be held at a later date.

In lieu of flowers, memorial contributions are suggested to People Helping Paws or Hospice Compasses.

To send flowers to the family or plant a tree in memory of Robert K. Johnson, please visit our Heartfelt Sympathies Store.

There are no events scheduled. You can still show your support by sending flowers directly to the family, or planting a memorial tree in memory of Robert K. Johnson.
Visit the Heartfelt Sympathies Store

Posted May 21, 2021 at 01:21pm
Robert, I saw you and Janet at a Class of 1969 reunion. I knew Janet from the days when our mothers worked together at Tweedies. Janet, you have had two losses in the last few months with the passing of Charlie and now Robert. You and your families have my sympathy and prayers. Pamela (Brock) Mueller.
Comment Share
Share via:
KH

Posted May 21, 2021 at 10:18am
Janet, We always enjoyed spending time with you and Robert. Robert was witty, fun and a great guy!! He enjoyed life to the fullest! Your love for each other showed everyday! Robert will be missed by all that were lucky enough to know him!! Our thoughts and prayers are with you and Jennee during this very difficult time. May God give you strength in the coming days! Your friends, Jim, Kathy and Matt Hoelscher
Comment Share
Share via:
JB

Posted May 19, 2021 at 04:44pm
Jay & the entire Johnson family"
Please accept our deepest heartfelt sympathy for Robert's passing. May he rest in God's loving arms forever. God Bless Us All.
Comment Share
Share via:
JD

Posted May 19, 2021 at 03:02pm
I spent many days listening to Bob make calls at work. He was special with his interviews. I remember a special call one day that endeared me to his style. It was a very snowy day in January and Jeff city was getting slick. He was calling a regular in Springfield to get their information. He asked how things were there and you could tell they were talking about the icy conditions they were getting. Without missing a beat, he replied, "well it's sunny and 65 here in Jeff." That is what made Bob special. My thoughts to all who knew him. RIP Bob.
Comment Share
Share via:
KS

Keeping you and your family in our thoughts and prayers.Robert was truly a gem and I know he will be missed ! Love and hugs ! 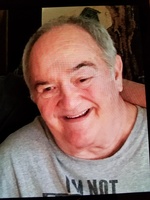