To share your memory on the wall of Robert Nilges, sign in using one of the following options:

He was born on January 18, 1931 in St. Louis County, Mo. a son of James Roy Nilges, Sr. and Lillie T. Spaete. Bob graduated from high school in Chester, Illinois and went on to attend Jefferson City Junior College. Immediately following college, Bob enlisted in the United States Marine Corps. While stationed in Washington D.C., Bob met Janet Ruth Andresen who he married on April 24, 1953 in Washington D.C. He continued to proudly serve his country until he was honorably discharged in January 1955.

Following his military service, Bob was employed with the Missouri Highway Department for over 40 years.

He was a past member of the First United Methodist Church and the Fraternal Order of the Eagles, Aerie 2693.

Bob loved to be outside, whether it was doing yard work, feeding and watching the birds or taking his dog for a walk, he was happy to be outdoors. He and his wife owned a cabin at the lake of the Ozarks which has been the setting of many fond memories for the whole family over the years. Bob was reliable and caring, he was willing to help in any way he was able and rarely used the word “no”. He was a very skilled bowler, enjoyed countless trips to Vegas, and was quite handy. Bob was a man with a big heart who always gave the very best of himself.

Private family services will be held at the Mausoleum of Riverview Cemetery with the Reverend Jeannie Martin Dudenhoeffer officiating.

In lieu of flowers, memorials are suggested to the Jefferson City Animal Shelter or the DAV.

To send flowers to the family or plant a tree in memory of Robert B. Nilges, please visit our Heartfelt Sympathies Store.

There are no events scheduled. You can still show your support by sending flowers directly to the family, or planting a memorial tree in memory of Robert B. Nilges.
Visit the Heartfelt Sympathies Store

Posted Mar 10, 2020 at 01:35pm
Jim & the entire Nilges family:
Please accept our deepest heartfelt sympathy for your father's passing. May the good Lord be with his family & many friends as they will think of him often. America thanks Robert for his brave service to our country while in the U.S. Marine Corps. Marine Nilges now guards the very "Gates of Heaven". Semper Fidelis.
Comment Share
Share via:
EH

Posted Mar 10, 2020 at 10:57am
Sorry to see that Bob has passed. I have fond memories of Bob and Janet. You have my deepest sympathy.
Comment Share
Share via: 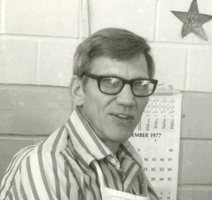