To share your memory on the wall of Robert Ridenhour, sign in using one of the following options:

Print
Robert Joseph Ridenhour, age 77 years, of Eugene, Mo. passed away Thursday, May 2, 2019 at the Eldon Nursing and Rehabilitation Center.

Bob was born on November 23, 1941 in Jefferson City, Mo. a son of Norman O. and Erma F. (Williams) Ri... Read More
Robert Joseph Ridenhour, age 77 years, of Eugene, Mo. passed away Thursday, May 2, 2019 at the Eldon Nursing and Rehabilitation Center.

Bob possessed a strong work ethic his entire life. He was employed with Valley Auto and later Harmen Glass in Jefferson City as a professional windshield glass installer for almost 40 years. Prior to his work as a glass installer, he grew up being a farm hand and working at Tweedie Shoe Factory.

Bob was an avid outdoorsman and enjoyed fishing, camping and even cutting firewood. Some of his favorite memories were spending most weekends with family at their cabin on the Lake of the Ozarks. He also looked forward to watching his son work on his six-wheel buggies and playing a competitive game of pitch with friends and family while sipping a cold beer.

Bob will be remembered for his generous spirit and always looking out for others. In his later years, that spirit went to spoiling his grandchildren and great-grandchildren.

He was preceded in death by his parents and one brother, Roy Ridenhour.

In lieu of flowers, memorial contributions are suggested to Robert Ridenhour Memorial Fund.

To send flowers to the family or plant a tree in memory of Robert Joseph "Bob" Ridenhour, please visit our Heartfelt Sympathies Store.

You will receive any future notification messages.
Print
Private memorial service will be held at a later time 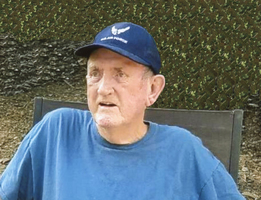