To share your memory on the wall of Robert Semb, sign in using one of the following options:

He graduated from Pom... Read More
Robert E. (Bob) Semb, 85, of, Jefferson City, passed away October 20th, 2019 at Capital Region Medical Center. He was born in Swedesboro, New Jersey on October 28th, 1933 to Baldwen A. Semb and Katherine Argo Semb.

He graduated from Pompton Lakes High School, in Pompton Lakes, New Jersey in 1952. He moved to Washburn, Wisconsin where he met his future wife Marjorie (Midge) Grage at the Bayfield Roller Skating Rink. Bob and Midge were married on Friday, August 13th, 1955. Forever after, he believed Friday the 13th to be a very lucky day.

Bob enlisted and served in the United States Army from 1955 to Friday, December 13, 1957. Bob graduated from the University of Alabama in 1960 with a degree in Business Administration. His specialty was Utility Rates. He worked for the Wisconsin Public Service Commission before moving to Jefferson City to work for the Missouri Public Service Commission as Chief Accountant and then as Director of Utilities – Finance. After leaving the PSC he worked for various utility companies in Kansas and Wisconsin before taking an early retirement and moving back to Jefferson City to be near their children and grandchildren.

Bob earned his private pilot’s certificate and loved to fly. While in Washburn, Wisconsin, Bob and Midge became EMT’s and volunteered with the Washburn Area Ambulance Service. Bob also served as a Deputy County Coroner in Bayfield County Wisconsin for four years. Bob was very active with the Jefferson City Eagles Club for several years. Bob especially enjoyed his hummingbirds that returned to his feeder every year. He was a voracious reader and liked exercising and working out at the Capital Region Healthplex which he did seven days a week.

Bob was preceded in death by his wife Midge in 1992.

A memorial service will be planned at a later time.

Those wishing should make a contribution to the charity of their choice.

To send flowers to the family or plant a tree in memory of Robert Semb, please visit our Heartfelt Sympathies Store.

There are no events scheduled. You can still show your support by sending flowers directly to the family, or planting a memorial tree in memory of Robert Semb.
Visit the Heartfelt Sympathies Store 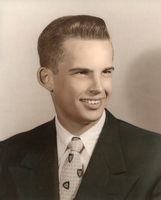