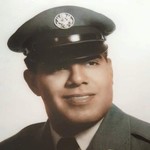 He was born on December 26, 1937 in Buckeye, AZ a son of the late Robert and Belin (Martinez) Villa. He was married in April 1975 in Tucson, AZ to Sondra Hodson.

Robert graduated from Santa Ana High School and received his Bachelor’s degree in Education from Lincoln University. He worked at public schools throughout Central Missouri. He also worked for the Jefferson City News Tribune for close to 15 years, and retired from the Missouri Department of Corrections.

Robert enlisted in the United States Air Force on April 1st and proudly served his country for 23 years. (1957-1980) He served at multiple duty locations, stateside and overseas and earned numerous awards.

Robert was also preceded in death by: four sisters; one brother; and a son-in-law, Kelley Heather.

Visitation will be held at Freeman Mortuary from 12:00 until 2:00 pm Thursday October 31, 2019. A Celebration of Robert’s Life will be held at 2:00pm Thursday in the Freeman Chapel. Graveside services with military honors will follow at Hawthorn Memorial Gardens.

In lieu of flowers, memorials will be given to the Central Missouri Honor Flight.