To share your memory on the wall of Roger Maserang, sign in using one of the following options:

Roger lived quietly, but loved deeply. He grew up in Granite City, and North Dupo, Il. He was a graduate of Dupo High School. After graduation, Roger went on to earn a degree in Journalism from Southern Illinois University in 1963, and continued his education in Journalism in graduate school at the University of Missouri. Later, he earned a degree in Secondary Education from Central Missouri State University.

Roger started his career working for newspapers, but found his calling while working for the Show-Me Regional Planning Commission. There, he began photographing and researching historic buildings in central Missouri. Most recently, Roger was a Historian at the Missouri State Historic Preservation Office. As historian, he helped property owners and consultants nominate historic battlefields, buildings and districts to the National Register of Historic Places.

Roger had a love of the written word. He savored books, not just for their stories, but for how a talented writer could craft a well-turned phrase or passage. He especially loved reading anything by John Updike. He used what he learned from reading good books to become a good writer himself. Roger infused his work with interest and wit sometimes acerbic, but never unkind. While he had a talent for writing, Roger had a passion for photography. He captured memories of his family, strangers on the street, historic buildings, and scenes of beauty and desolation. He wanted a good picture, but he enjoyed the process. Roger often spoke of the visceral experience of holding the weight of a camera in his hands and loading the film. He spent much time considering the light, adjusting f-stops and shutter speeds, and would relish the click of the shutter release and advance of the film. He was a collector, but most of all, he loved his film camera collection. Roger used many cameras, and he collected them for their innovation and beauty of design. Roger loved a good road trip. He got his first taste of trips to the Smoky Mountains with his mom, and a journey to California with his dad along Route 66. He later shared that lobe with his first wife, Cathy and son Benjamin, who made some memorable journeys to the Smokey and Rocky Mountains. Roger and Tiffany traveled from Maine to California in car and train, with side trips to some of America’s weird and wonderful places. Roger had a passion for learning. He wanted to know as much as he could about anything that he found interesting. Roger was a very proud Papa and Grandpa.

Roger’s life can be honored by voting – not with party loyalty, but with empathy and care for your neighbor. He can be celebrated by eating real blueberry pancakes with real maple syrup and an ice cream chaser, daily if possible.

Roger was preceded in death by: his parents; one aunt, Frances Minerman; and one uncle, Charles Minerman.

A memorial service for Roger will be conducted at a later date.

In lieu of flowers, memorial contributions are suggested to a charity of the donor’s choice – preferably one that embraces social justice issues or animal welfare.

To send flowers to the family or plant a tree in memory of Roger Charles Maserang, please visit our Heartfelt Sympathies Store.

Receive notifications about information and event scheduling for Roger

Print
A memorial service for Roger will be conducted at a later date.

We encourage you to share your most beloved memories of Roger here, so that the family and other loved ones can always see it. You can upload cherished photographs, or share your favorite stories, and can even comment on those shared by others.

Guaranteed hand delivery by a local florist
AM 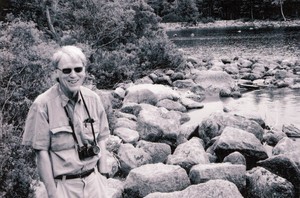