To share your memory on the wall of Romall Pruett, sign in using one of the following options:

He was born on October 16, 1958 in Detroit, Michigan, the son of Julius Price and Mary Pruett. He was married on September 18, 1987 in Toledo, Ohio to Reola Pruett, she survives at the home.

Romall attended Northern Detroit High School in Detroit. Most recently, he was self-employed as an over the road truck driver, but before buying the truck and going into business for himself, Romall was a professional boxer. He started his boxing training when he was young and traveled the world boxing professionally for nearly two decades. It was a lifelong passion that he enjoyed sharing with close friends, and family.

Romall was a dedicated man of faith. He was baptized in the name of Jesus in Spring of 2003 and was a currently a member of the Great Mercy Apostolic Temple in Jefferson City. He even started a church in the basement of the family home in Detroit. Romall was known for his sense of humor. He had an infectious smile and a magnetic personality. Everyone was drawn to him, specifically young people who lovingly referred to him as “Old School”. Romall was loyal friend and lead with an open heart. He even took in any family or friends in need and everyone who knew him knew they could count on him if they were ever in need. He enjoyed relaxing and watching old tv shows and westerns and loved jazz music. Above all, Romall cherished his family, his wife was his best friend and his kids were his greatest accomplishment. He was happiest when entertaining the grandkids. Romall left those who love him with a legacy of determination, perseverance and faith. A few of his signature sayings were, “walk tall, don’t stumble”, “keep your head up”, “God be with you” and “I love you more than money”.

He was preceded in death by his parents, his daughter, Ebony Pruett, his brother, Andre Pruett, his sister, Andrea Pruett, and two grandsons, Traevon Terrell and Jamel Alexander.

A celebration of life service will be conducted at 1:00 p.m. Saturday, May 23, 2020 at the Great Mercy Apostolic Temple with the Reverend Jonas officiating.

In lieu of flowers, memorial contributions are suggested to the Romall Pruett Memorial Fund.

To send flowers to the family or plant a tree in memory of Romall Julius Pruett Sr., please visit our Heartfelt Sympathies Store.

Receive notifications about information and event scheduling for Romall

We encourage you to share your most beloved memories of Romall here, so that the family and other loved ones can always see it. You can upload cherished photographs, or share your favorite stories, and can even comment on those shared by others.

The Ely's & Tilmons sent flowers to the family of Romall Julius Pruett Sr.
Show you care by sending flowers

Posted May 21, 2020 at 01:40pm
Hey Family, although we couldn't be there, we all just wanted to send some flowers to let you know we were thinking about you. May God give you peace.

The Ely's & Tilmons purchased flowers for the family of Romall Pruett. Send Flowers 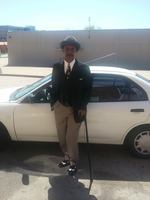