To share your memory on the wall of Russell Greenhagen, sign in using one of the following options:

Print
Russell John Greenhagen Jr., 77, passed away Sunday, November 24, at his home in Jefferson City, MO. Following serious medical difficulties in 2013, he showed determination and fortitude as he dealt with an aftermath of health issues.

He... Read More
Russell John Greenhagen Jr., 77, passed away Sunday, November 24, at his home in Jefferson City, MO. Following serious medical difficulties in 2013, he showed determination and fortitude as he dealt with an aftermath of health issues.

He was born in Brainerd, MN, to Hazel and Russell Greenhagen Sr. on May 16, 1942. He attended Edison High School in Minneapolis, where he especially loved history and English and singing bass in the Choral Club. He also attained the rank of Eagle Scout, and built a large newspaper route that he shared with his younger brothers.

In 1964 Russell graduated with honors from Macalester College, where he was president of his senior class. As a sophomore he was accepted into the University of Minnesota SPAN (Student Project for Amity among Nations) program. After studying Swahili and taking classes in East African culture and politics, Russell and eight other students from Minnesota colleges-including Karen Larvick, a student at Gustavus Adolphus College—spent the summer of 1963 In Tanganyika, a year before it became Tanzania. Russ and a fellow SPANer climbed Mt. Kilimanjaro, a feat he repeated in the mid-70s when he went back to Tanzania with a group of his high school students.

Russell received a master of arts in East African history from Northwestern University in 1968, and soon thereafter moved with his wife and young daughter back to his hometown. He joined the faculty at St. Paul Academy, where he stayed for a decade, teaching history courses and chairing the department. During this period Russell greatly enjoyed camping, hiking, and cross country ski trips with family and friends, and he completed an Outward Bound course.

In 1979 Russell moved to Kansas City to teach at The Barstow School. But after some life changes in the mid-80s Russell decided it was time to follow another path that had always interested him: law. In 1986 Russell earned his J.D. from UMKC School of Law. He became a member of United States Arbitration and Mediation, specializing in alternative dispute resolution. In January 1995 Russell moved to Jefferson City to head a new mediation division for the Missouri Department of Labor. In 1997, Russell reunited with and married his old SPAN friend and love of his life, Karen Larvick.

In retirement Russ returned to teaching, as a part-time instructor at Moberly Area Community College and correctional institutions in Boonville and Vandalia. Russell was very active in his community, mentoring through Big Brothers Big Sisters, serving on the board of the YMCA and on the Lewis and Clark commission, and serving as a Stephen Minister and a church deacon with First Presbyterian Church. He and Karen made two church mission trips to Hungary and Ukraine, and traveled widely in Europe. They also enjoyed many trips in their RV. Russell was a voracious reader and loved his cat Indiana Jones and his dogs (Cricket, Prester John, Smokey, Blue, Tasha, Maggie, and Max).

Intellectually curious to the last, Russell chose to have his body donated to the University of Missouri Medical School for educational and research purposes.

A Celebration of Life will be held at First Presbyterian Church on Saturday, December 21, at 11:00 AM. Family and friends will be received at the church from 9:30-11:00 preceding the service.

In lieu of flowers, memorial donations are suggested to First Presbyterian Church, the Samaritan Center, or a charity of choice.

To send flowers to the family or plant a tree in memory of Russell Greenhagen Jr., please visit our Heartfelt Sympathies Store.

We encourage you to share your most beloved memories of Russell here, so that the family and other loved ones can always see it. You can upload cherished photographs, or share your favorite stories, and can even comment on those shared by others.

I am so sorry to hear of Russ' death. He had such a wonderful appreciation of life's adventures and opportunities and encouraged me to look beyond the ordinary and experience life! The world was graced to have him here for a while and I am a richer person for knowing him. 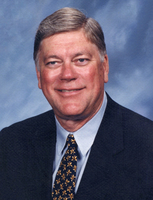