To share your memory on the wall of Scotty Newton, sign in using one of the following options:

He was born on July 28, 1963 at Memorial Community Hospital in Jefferson City, Mo., the son of Delbert E. and Maggie B. (Smith) Newton.

Scotty was a graduate of Dora High School near West Plains, Mo. and called various Missouri cities “home” throughout his life.

After graduation, Scotty owned and operated Miller Time Construction and worked as a carpenter for many years until injury and illness forced his retirement in 2007.

Scotty could easily be described as the “life of the party” and loved to have a good time. He enjoyed the outdoors and could often be found on float trips on both the Bryant and North Fork Rivers, fishing, and deer hunting. Scotty was a man of faith. He was baptized in the Bryant River and found solace in spending time there when he needed to find peace. Some of Scotty’s favorite memories include summer cookouts and other gatherings with his family. Scotty was an avid sports fan. He coached his son’s in baseball, played softball, and rarely missed watching a St. Louis Cardinals or Kansas City Chiefs game. Scotty will be most remembered for having a big heart and his dedication to the things that were important to him.

Scotty was preceded in death by one brother, Stan Newton.

To send flowers to the family or plant a tree in memory of Scotty E. Newton, please visit our Heartfelt Sympathies Store.

Receive notifications about information and event scheduling for Scotty

We encourage you to share your most beloved memories of Scotty here, so that the family and other loved ones can always see it. You can upload cherished photographs, or share your favorite stories, and can even comment on those shared by others. 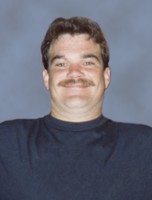