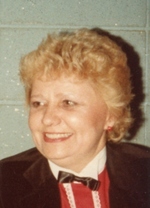 She was born on April 15, 1939 in Omaha, Nebraska, the daughter of Bry and Anna Marie (Evens) Jensen. She was first married in 1957 to Frank Sedlacek and it was to this marriage that her four daughters were born. On April 16, 1983 in Arnold, Nebraska, she was married to James Lyle “Jim” Foran, who survives.

Growing up in Nebraska, Sharron graduated from Benson High School in 1955. She went on to earn her LPN in Omaha, where she began her over 40-year professional career in private duty home healthcare.

She had a strong relationship and love for the Lord and was a faithful member of First Baptist Church. She started many mornings reading her devotional to give her peace.

Sharron enjoyed traveling and long car rides; trips to Texas, Louisiana, Germany, Holland, and Austria were among her favorites. She had fond memories with Jim and her family camping throughout the Midwest region. She liked the beauty of the outdoors and sitting on her deck enjoying the birds and deer in her backyard. Sharron was a shopper and found joy in giving to others. Her family will remember her wonderful meals and gatherings, her sense of humor and will miss the cards she was known to send just to lift their spirits.

Sharron was preceded in death by her parents; her brother, James Jenson; her sister, Sandra Allen; and her in-laws, Lyle and Vieva Foran.

Visitation will be held at Freeman Mortuary from 5:00 p.m. until 6:00 p.m. Thursday, November 19, 2020 with her funeral service following at 6:00 p.m. in the Freeman Chapel with the Reverend Hannah Coe officiating. The family has requested anyone in attendance to wear a protective mask.

A webcast of her service will begin at 6:00 p.m. Thursday for friends that are not able to attend by going to the webstreaming link on this memorial page found under the "photos and videos" tab. Please be sure to click the speaker icon to enable sound.

Graveside services and interment will be held at 11:00 a.m. Saturday, November 21, 2020 at Arnold Cemetery in Arnold, Nebraska.

In lieu of flowers, memorial contributions are suggested to First Baptist Church, 301 E. Capitol Avenue, Jefferson City, Mo. 65101. Friends may mail sympathy cards to the funeral home or leave condolences online to be given to her family.