To share your memory on the wall of Shaun Cooley, sign in using one of the following options:

Provide comfort for the family of Shaun Cooley with a meaningful gesture of sympathy.

Print
Shaun Ray Cooley, 43, of Jefferson City, Mo., passed away Tuesday, January 14, 2020 at his home after a brief illness with ALS.

He was born on June 9, 1976 in Jefferson City, Mo., the son of the late Ralph and Sharon (Hook) Cooley. Shaun was not only large in stature but had a sense of humor and personality to match. His favorite motto was “life’s a garden, dig it!” so, as you can imagine he enjoyed every day to its fullest.

A lifelong resident of the Jefferson City area, Shaun graduated from Jefferson City High School in 1994. He excelled in sports during those years and was proud to be on the 1993 State Champion Jays Football Team. He received honors as an All-State lineman during their perfect season his senior year. He went to Southwest Baptist University in Bolivar, Mo. where he continued to play and thrive in football.

He was married on September 16, 2000 in Jefferson City to his high school sweetheart, Tammy (Prewitt) Cooley.

Shaun was employed with America Building Products as their warehouse manager for 21 years.

With him being an avid sports fan, Shaun loved to coach his children. He was present at every one of their games and supported them through many baseball, football and volleyball seasons. If he was not with family or working, Shaun was probably outdoors crappie fishing, hunting or snagging spoonbill on the river.

In lieu of flowers, memorial contributions are suggested to either the Shaun Cooley Memorial Fund or the ALS Foundation.

We encourage you to share your most beloved memories of Shaun here, so that the family and other loved ones can always see it. You can upload cherished photographs, or share your favorite stories, and can even comment on those shared by others.

Posted Jan 28, 2020 at 12:04pm
Tammy and family. So sorry to hear about Shaun's passing. I worked at SWEC with Lucas and was honored to know you, Shaun and your family. I ran into Shaun and Lucas out shopping for Skylanders one day. I recall the gentle smile on Shaun's face and his patience helping Lucas pick out just the right figurine. God bless your sweet family.

Posted Jan 18, 2020 at 02:29pm
Please accept our most heartfelt sympathies for your loss, our thoughts are with you and your family during this difficult time. XOXOXO

Posted Jan 18, 2020 at 01:42pm
I will remember Shaun as larger than life what a guy! Each time I saw him I would get an awesome hug & his big smile. Shaun was truly all about living life to its fullest. Tammy truly was his soul mate, I remember him telling me life was complete with her by his side. Fly with Angels Shaun, this isn’t the end all of us will join you in heaven someday. Tammy & children I will keep you in my prayers.
Comment Share
Share via: 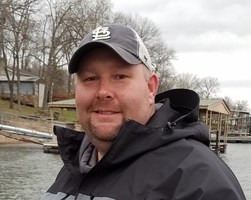