To share your memory on the wall of Suzanne Dennison, sign in using one of the following options:

Provide comfort for the family of Suzanne Dennison with a meaningful gesture of sympathy.

Suzanne was born on April 14, 1948 in Lamar, Mo. the daughter of Robert and Martha (Duffy) Douglas. She was marr... Read More
Suzanne Dennison, age 70, of Jefferson City, Mo., passed away Wednesday, March 13, 2019, at her home surrounded by friends.

Suzanne was born on April 14, 1948 in Lamar, Mo. the daughter of Robert and Martha (Duffy) Douglas. She was married three times and her third husband preceded her in death in 2007.

She graduated from Lamar High School in 1966. She received her teaching certificate from Southwest Missouri State in Springfield, Mo. in 1970 and went on to receive a Master’s Degree in Education from Lincoln University in the early 80’s.

Suzanne’s lifelong passion was education and she began by teaching music in Greenfield, Mo. She moved to Jefferson City to start her career as a professional educator with the Jefferson City Public Schools for thirty-one years until her retirement in 2001. Even into her retirement, Suzanne continued to substitute for J.C.P.S. because she loved teaching. She was a member of the National Education Association (NEA) and the Missouri State Teacher’s Association (MSTA).

Suzanne was interested in local history and a member of the Daughters of the American Revolution, Historic City of Jefferson, the Cole County Historical Society, and the Barton County Historical Society, where her father was a founding member. Suzanne attended the First United Methodist Church, and was a former member of the Jefferson City Symphony, Cantorum, and Beta Sigma Phi Sorority. She volunteered for many other organizations, including Hospice Compassus.

Suzanne was an avid antique collector – finding and selling her finds on eBay.
She was an active member of River City Collector’s Club from her antiquing hobby. She enjoyed refinishing furniture, reading, and snuggling with her beloved cats.

Survivors include: her son, Bart Douglas Phipps of Stockton, Mo., and two grandchildren, Dakota Wayne who serves in the United States Army and Bridget Eileen of Sarcoxie, Mo.

She was preceded in death by her parents, two of her husbands, and many other relatives.

Private graveside services and interment will be held at Lakeview Cemetery in Lamar, Mo.

We encourage you to share your most beloved memories of Suzanne here, so that the family and other loved ones can always see it. You can upload cherished photographs, or share your favorite stories, and can even comment on those shared by others.

Posted Mar 18, 2019 at 03:51pm
Mrs. Dennison was my third grade at Moreau Heights many years. I am sad to hear of her passing. My prayers are with her family and friends during this difficult time.
Comment Share
Share via: 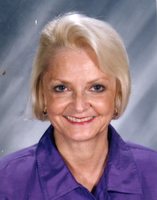