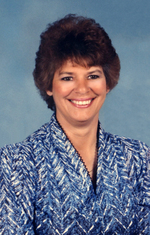 A lifelong resident of the Central Missouri area, Teresa was a 1964 graduate of Jefferson City High School.

Teresa started work at the International Shoe Factory and Cheesebrough-Ponds. She retired from the Jefferson City Public Schools as a cafeteria cook.

Teresa found joy in being at her home. She enjoyed the peacefulness of watching the hummingbirds flutter outside. She could often be found reading, doing crossword puzzles, and watching old country westerns. Teresa put everyone before herself, and had love for taking care of others, especially her family. She was a great cook and an even better baker. She enjoyed cooking and passing on her recipes to her granddaughter, Delaney.

She was preceded in death by her parents; son, Matthew Ferguson; sister and brother-in-law, Audrey and Ralph Dietzel; father/mother-in-law, Elbert and Viola Ferguson; and brother/sister-in-laws, Francis “Jake” and Rose Jaegers, Patricia Ellis, and Frank Rogers.

Visitation will be held at Freeman Mortuary from 2:00 until 4:00 pm Wednesday, November 4, 2020. A Celebration of Life service will follow at 4:00 pm in the Freeman Chapel. Anyone is welcomed and encouraged to wear personal masks while in attendance.

In lieu of flowers, memorials are suggested to the Teresa Ferguson Memorial Fund.