To share your memory on the wall of Terry Ehrsam, sign in using one of the following options:

He was born on February 27, 1946 in Junction City, Kansas a son of the late Paul and Delia (Call... Read More
Terry Troy Ehrsam, 73, of Jefferson City, passed away Wednesday, November 20, 2019 at SSM Health St. Mary’s Hospital surrounded by family.

He was born on February 27, 1946 in Junction City, Kansas a son of the late Paul and Delia (Call) Ehrsam. His family moved to Fulton, Missouri where Terry attended Central School, a primitive one room school through 8th grade. He graduated from Fulton High School in 1964 and furthered his education at William Jewell College in Liberty, Mo.

He met the love of his life, Barbara Jackson in 1993 and after being together for 17 years, they decided it was time to make it official and were married on May 20, 2010 in Eureka Springs, Arkansas.

Terry joined the United States Navy in 1966 “before he received his draft notice” and was assigned to the Aircraft Carrier USS Independence. He ended up stationed at the Navy Air Station North Island in San Diego, Ca. He served as an Aviation store keeper issuing parts to squadrons in Vietnam until he was honorably discharged in 1970. On November 7, 2016, Terry was honored to be a participant with the 43rd Central Missouri Honor Flight to Washington D.C.

After four years with the Navy, Terry moved to Columbia and went into retail and newspaper advertising. Quickly realizing this industry was not for him, Terry began his career in law enforcement. He joined the Boone County Sheriff’s Department; where his duties included answering calls for assistance, patrol and investigations.

After serving four years with the Boone County Sheriff’s Department he accepted a position with the Capitol Police under the State of Missouri Department of Public Safety. He was transferred to the Missouri Governor's Mansion where his duties were to protect the Governor's home, grounds, and the Governor when residing in the home. He served under seven Governors: Joseph P. Teasdale, Kit Bond, John Ashcroft, Mel Carnahan, Roger B. Wilson, Bob Holden, and Matt Blunt. After working with the Capitol Police for 26 years, he retired in 2006. During this time, he was also a Reserve Deputy with the Cole County Sheriff’s Department for 28 years, retiring in 2016. After he retired, he continued to be the Posse Advisor for the Cole County Sheriff’s Posse and worked for several years as a funeral assistant with the team at Freeman Mortuary.

Terry was well versed in the history of our Missouri Mansion and enjoyed sharing his knowledge with guests at the mansion and with the Mansion Docents. He became the first male docent for the Missouri Governor's mansion. The character he chose to portray was Frank James. Frank had a history with the governor's mansion and Terry was a "cowboy" at heart.

Terry was a member of the National Rifle Association and American Legion. With his thirst for history, he collected knives, frequented antique shops and travelled. His favorite trip was cruising Route 66 from Missouri to California in his yellow Corvette.

Visitation will be held at Freeman Mortuary from 10:00 a.m. until 12:00 p.m. Monday, December 9, 2019 with a celebration of Terry’s life following at 12:00 p.m. in the Freeman Chapel with Celebrant Gara Loskill officiating. Graveside services and interment with military honors will follow at Riverview Cemetery.

In lieu of flowers, memorials may be given to the Central Missouri Honor Flight, Friends of the Missouri Governor’s Mansion or Cole County Sheriff’s Department.

To send flowers to the family or plant a tree in memory of Terry T. Ehrsam, please visit our Heartfelt Sympathies Store.

Receive notifications about information and event scheduling for Terry

We encourage you to share your most beloved memories of Terry here, so that the family and other loved ones can always see it. You can upload cherished photographs, or share your favorite stories, and can even comment on those shared by others.

Posted Dec 04, 2019 at 11:06pm
As a Docent, I often depended on Terry for details about the Mansion and its environs. Once a visitor commented on the "dying tree" near the Mansion entrance. It looked dry and droopy. Since I agreed with the comment, Terry stepped over and politely added his knowledgeable comment: "Oh yes, the tree does look dead, but it isn't. It is a cypress and in Springtime, it will green up and flourish once again". Good news to both the visitor and me; I have often thought of Terry's informative comment
each Spring when I see that indeed it is green and healthy once again. Patt Behler, docent beginning in 1993.
Comment Share
Share via: 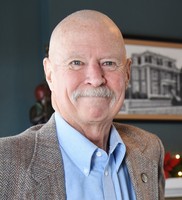