To share your memory on the wall of Theresa McVey, sign in using one of the following options:

Provide comfort for the family of Theresa McVey with a meaningful gesture of sympathy.

She was born on September 22, 1964 in St. Louis, Mo. the daughter of Jacob an... Read More
Theresa Marie McVey, age 54 years, of Jefferson City, Mo., passed away Thursday, September 5, 2019, at Capital Region Medical Center, surrounded by her family.

A lifelong resident of Jefferson City, Theresa attended the Kirschner State School. She worked with Capitol Projects for over 30 years starting in 1986. During her time at Capitol Projects she worked on their ABB ferrules and studs job until ill health forced her to retire in January 2018.

Theresa loved to watch television especially soap operas. The Young and the Restless and The Bold and the Beautiful were her favorites. She was a huge country music fan and faithfully read her country magazines each week. If asked, she would tell you she was Tim McGraw’s biggest fan. Theresa also enjoyed fishing with her family, long car rides and simply being outdoors. Other hobbies included coloring and baking cookies. Time spent with her friends or her cats, David and Tasha, was always considered special by Theresa.

Theresa will be remembered for her warm and welcoming personality that made her truly loved by all. Her smile would light up her face and brought joy to all who knew her, especially all those that she waved at daily. The saying, "walking on sunshine" definitely referred to Theresa.

She was preceded in death by her parents. Her father passed away on the same day in 1995.

A funeral service will be conducted at 11:00 a.m. Wednesday, September 11, 2019 in the Freeman Chapel with Celebrant Gara Loskill officiating. Graveside services and interment will be held at Hawthorn Memorial Gardens.

We encourage you to share your most beloved memories of Theresa here, so that the family and other loved ones can always see it. You can upload cherished photographs, or share your favorite stories, and can even comment on those shared by others.

Posted Sep 07, 2019 at 08:29pm
Theresa; in the 19 years Jacob and I have been together, u have really brightened everyday for us, thru all the fishing trips, Jacob or I had to bait the worm on ur line 'cause u couldn't do it; and the times we camped out; to the trips we all 3 took to Kansas City, the Zoo u loved so much, the over nights at our place and the cookie making parties we had, the strawberry daiquiri's; Halloween trick and treating we did, taking u to see HO HO ( Santa) staying up and watching scary movies all night, putting make up on each other, playing skee ball at Miner Mikes an on the strip at the lake, the movies we went to see; the shopping trips; going on all the drives we three took; buying the things we wanted just because; spending Jacob's money; helping you blow your nose when you were sick with a cold; going swimming; an just sitting in front of the TV watching you fall asleep ……..IT HAS BEEN AN HONOUR BEING YOUR SISTER IN LAW ……. (Poots) Theresa, I will forever miss you....but I know you are in heaven with your Mommy and Daddy and you are happier. Love ya Sarah
Comment Share
Share via:
DR

Posted Sep 07, 2019 at 08:00pm
My dear friend Theresa,God has you now,My hearts breaks that we were taken you would call me your sister i do love you my sweet sister.
Comment Share
Share via: 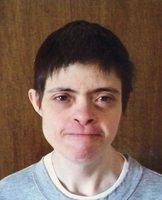