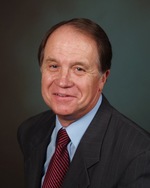 Thomas Merlin Ittner, age 71, passed away on Friday, June 14, 2019, at Barnes Jewish Hospital in St. Louis after a two-year valiant and courageous battle with non-Hodgkin's lymphoma.

On May 15, 1971, Tom married the love of his life, Lisa Ann Coffman of Jefferson City, MO, at Immanuel Lutheran Church in Honey Creek, MO. And so began a beautiful journey that brought them joy and life for the next 48 years. They had two children, Chad A. Ittner of St. Louis, MO and Julie A. (Ittner) Chappell of Cassville, MO. And he was known as Papa to his two grandchildren who were his pride and joy, Avery and Jack Chappell.

Tom valued hard work which he learned at an early age on his parent's dairy farm. He was one of the first in his family to graduate with a college degree from Lincoln University. He held down three jobs to put himself through college. After college, Tom's strong work ethic would lead him to a 40-year career at the Missouri Farm Bureau where he would ultimately become Manager of the Life Insurance Company. He led a talented and dedicated staff where any achievements were the results of a group effort that Tom had the very fortunate privilege of being a part of each and every day. He would always say success in the Life Department was because of the extraordinary work from the entire team and he was honored to have an incredibly talented group of professionals working tirelessly side-by-side. He was proud to serve on the management team for Farm Bureau Insurance Companies and attend the annual Farm Bureau Manager’s Meeting. He was also a founding board member of the Missouri Life & Health Insurance Guarantee Association. After 40 years of observing the sales side of insurance and financial planning, he decided to help others by becoming a Sales Associate at Thrivent Financial in Jefferson City, MO. During his 9-year tenure, he found success and incredible gratification by helping many people in Mid-Missouri and around the country to better prepare for their financial futures in hopes that it would bring them peace of mind in years to come.

Tom's faith was important to him and at the center of his life until his last breath on this earth. His faith led him to want to serve others and help people live a better and more dignified life. He was a charter member of Peace Lutheran Church. He served in many capacities at Peace as well as at his boyhood church, Immanuel Lutheran Church at Honey Creek. In his later years, Tom's service to others would allow him to work with Habitat for Humanity, the Special Learning Center and a past chairman of the Cole County Lutheran Home Association.

In his spare time, Tom loved to play golf and had the privilege of playing some of the best-known courses across the country. He enjoyed golf outings with colleagues, friends, and definitely with members of his family. His early morning rounds were special as he was usually the first out on the course. Tom and Lisa also traveled the world taking them to Europe, the Caribbean, and all around the United States, including many times to their favorite spot in Hawaii. But their most treasured trips were early morning Saturday jaunts to Springfield, MO to spend a day or weekend with Avery and Jack.

Tom is survived by his loving wife, Lisa; his children who are so very proud of their Dad, Chad Ittner of St. Louis and Julie Chappell (husband John) of Cassville; his two special grandchildren, Avery and Jack Chappell; his siblings who are honored to have Tom as their big brother and protector, Janice Lehmen, Mike Ittner (wife Teresa), Roger Ittner, Don Ittner (wife Joyce), and Dianne Turner (husband Mike), all of Jefferson City; his brother-in-law, Coby Coffman (wife Jane) of Olathe, KS; his sister-in-law, Maribeth Neidert (husband Kim) of Jefferson City; and numerous nieces and nephews.

He is preceded in death by his parents, Walter and Pauline Ittner, and his in-laws, George and Virginia Coffman.