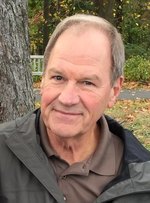 Tom was a graduate of Dyersburg High School and later a graduate of the University of Tennessee. He was a Tennessee Vol and he wore the orange and white proudly. Throughout his life and everywhere he went, he was known for his kindness to others and for his good-natured conversation and his disarming, pleasant humor. He enjoyed a long career as an independent sales contractor and his love of people was key to his success.

Tom was grounded in his faith in Jesus Christ. He lived out his faith by serving and loving his family and his community. He was a longtime member of the First United Methodist Church in Jefferson City where he taught Sunday School. Tom helped start Jefferson City Young Life Ministry and was actively involved for many years.

Tom was a golfer, enjoyed St. Louis Cardinals baseball and Civil War history. He was a fan of the Mizzou Lady Tigers and enjoyed attending the games. Tom made people laugh with his quick wit and clever jokes.

He was a true gentleman and loving husband for 43 years. As a Dad, Tom loved and adored his three children, leaving no doubt in their minds how much he cherished them. He was a father who reflected the love and kindness of Jesus. He was overjoyed by the births of his seven grandchildren. His grandchildren have so many delightful memories with Poppy.

Survivors include: his loving wife, Pam; three children, Matt and his wife, Tiffiney, Jenny and her husband Scott, and Ben and his wife, Candace, seven grandchildren, Isaac, Elijah, Sophia, Annelise, Zeke, Isaiah and Rosalia; and one brother John, and nieces and nephews.

Tom was preceded in death by his parents, Harry and Mary Boatright, and one sister, Nancy Boatright Tidwell.

A Celebration of Tom’s Life will be held at 12:00 p.m. Saturday, April 27, 2019 at the First United Methodist Church in Jefferson City, MO with the Reverend Daniel Hilty and Pastor Ben Boatright officiating. Graveside services and interment will be in Dyersburg, TN and announced at a later time.

A visitation will be held prior to the celebration of life service from 11:00 a.m. until 12:00 p.m. Saturday with an additional visitation immediately following his memorial service.