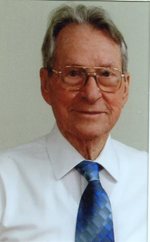 Warren was born January 15, 1921 in Russellville, MO to Fred and Mamie (Schneider) Dampf. He attended Russellville High School and graduated in 1938. He greatly enjoyed the Alumni Banquets at Russellville and attended in 2018.

After spending four years in the United States Navy in World War II, Warren began his insurance career by working for Missouri Department of Insurance. He later worked at Remley Insurance, MFA Mutual insurance, Casualty Indemnity of Jefferson City and was a member of the original Silvey Group that started in 1964. Warren retired in 1988.

He was united in marriage to Mary Jane Hayes on September 14, 1947 in Kansas City MO. Together they raised one son John.

He was married to Geraldine Scott in June 1993 and made their home in Columbia MO.

Warren had a strong faith and was a charter member of Our Savior’s Lutheran Church. He was a member of the Veterans of Foreign Wars, Basinger/Sone Memorial Post 1003 and the American Legion, Roscoe Enloe Post 5. He served on the board of directors at the Community Bank of Russellville for 20 years.

Warren was an avid sports fan, especially enjoyed cheering for the St. Louis Cardinals and Mizzou Tigers football and basketball teams. He had fond memories of going to Busch Stadium when he was younger with his father and those memories feed his passion for baseball and the Cardinals.

He was preceded in death by his first wife, Mary Jane Dampf; one brother, Nelson Dampf; two sisters, Wanda Hamilton and Julietta Hirschvogel; one daughter-in-law, Fran Dampf; and one step-grandson, Ryan Beckett.

Funeral services will be conducted at 12:00 p.m. Saturday, March 16, 2019 with the Reverend Scott Musselman officiating. Entombment with military honors will follow at Hawthorn Memorial Gardens.