To share your memory on the wall of Wilma Colvin, sign in using one of the following options:

Provide comfort for the family of Wilma Colvin with a meaningful gesture of sympathy.

A lifelong resident of the Central Missouri area, Wilma graduated from Iberia High School in 1943. Following High School, she hitched a ride to St. Louis where she worked for the United States Cartridge Company during World War II. Wilma returned to mid-Missouri to raise her family and later began working at Chesebrough Ponds where she was employed as a factory worker, making Q-Tips until her retirement.

A woman of faith, Wilma was a member at Fairgrounds Road Church of Christ in Jefferson City.

Something she remembered doing with her mother, Wilma enjoyed taking walks. She often went to Runge Nature Trail or to the Capital Mall to get her exercise. She was an avid reader and loved historical novels and anything about the U.S. Presidents and First Ladies. Wilma loved the “Little House on the Prairie” and was full of knowledge on the subject. She was always there to lend a helping hand and loved people. Most of all Wilma enjoyed spending time with her family.

She was preceded in death by her parents, step mother, Irene Winfrey, one brother, Kenneth Kellison, one sister, Shirley Beard, and two brothers-in-law, Pat Abrams and Carl Grip.

A funeral service will be conducted immediately following the visitation at 11:30 a.m. at the Fairgrounds Road Church of Christ with Carey Terry officiating. Interment will be conducted at 2:30 p.m. at Hawkins Cemetery in Brumley, Mo.

Donations are being accepted for: FAIR HAVEN CHILDRENS HOME.

Larry, Sharon, Richard & all of your RE/MAX Family and Enable Midstream Partners have sent flowers to the family of Wilma J. Colvin.
Show you care by sending flowers

Larry, Sharon, Richard & all of your RE/MAX Family

Larry, Sharon, Richard & all of your RE/MAX Family purchased flowers for the family of Wilma Colvin. Send Flowers

Posted Aug 14, 2019 at 10:56pm
My sympathy goes to the entire Colvin family and especially Gary and Larry with whom I went to school at Cole R-V at Eugene . Also, to Ronnie Winfrey, married to my cousin Cindy. I remember my family going to church at Scrivner Church of Christ with Dorlis and Wilma Colvin and their young family in the mid 1950s. Wilma remained a friend of my mother, Ruby (Allee) Wright, for many years. I remember Wilma as a very sweet and kind person indeed. May she rest in peace with God's love and mercy.

Posted Aug 13, 2019 at 10:59am
With heartfelt condolences from the JMOA Office of Jeff Evers & Laura Avery and the Twelve Mile District 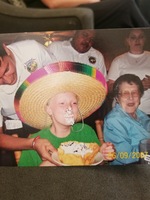