To share your memory on the wall of Wilma Duke, sign in using one of the following options:

She was born in Cherokee County, Alabama, in 1925, and was raised in Gadsden, Alabama. She graduated from Gadsden City High School and Howard College... Read More
Wilma Awbrey Duke, 95, passed away peacefully at home on Wednesday, September 16, 2020.

She was born in Cherokee County, Alabama, in 1925, and was raised in Gadsden, Alabama. She graduated from Gadsden City High School and Howard College (now Samford University), and, in 1945, married her high school sweetheart, Nelson. They were married 58 years, until his death in 2003. Nelson was a pastor, and Wilma’s role as his partner was of great importance to them both. Through the years, she also worked as a bookkeeper and a teacher of social studies and geography at Jefferson City High School. Most importantly, she and Nelson lovingly raised three sons.

From 1953-1963, the family lived in Montgomery, Alabama, then moved to Jefferson City, Missouri, where Nelson served as pastor of First Baptist Church for 27 years, until his retirement. Afterward, the two of them moved to Liberty, Missouri, to be near their son David and his family. After Nelson’s death, Wilma moved to Birmingham, Alabama, to be near her son John and other extended family. In 2010, she moved to Ann Arbor, Michigan, to be near her son Paul and his family. In Ann Arbor, she was a beloved resident of Brookhaven Manor and a cherished and active member of First Baptist Church of Ann Arbor, where Paul and his wife Stacey are co-pastors. Her faith, her family, and the well-being of others were of supreme importance to her. She was known and admired for her warmth, kindness, and good humor.

Wilma was predeceased by her parents, her sister, Nola C. King, her husband, G. Nelson Duke, and her eldest son, David Nelson Duke.

To send flowers to the family or plant a tree in memory of Wilma Duke, please visit our Heartfelt Sympathies Store.

Receive notifications about information and event scheduling for Wilma 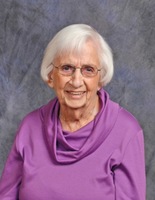