To share your memory on the wall of Austin Chinn, sign in using one of the following options:

Austin was born on August 17, 1977 in Jefferson City... Read More
Austin Garret Chinn, age 42 years, of Kansas City, Mo., a former Jefferson City resident passed away Friday, May 8, 2020 at his home after a two year struggle with toxic mold syndrome.

Shortly after his education, Austin began his employment at Burns & McDonnell in Kansas City, Mo. with their Power Plant Division as an electrical control specialist and was extremely dedicated to his job for the past 20 years. It was the ideal fit for Austin because he prided himself on his hard work and ability to fix problems with his critical thinking and computer skills. He loved working with CAD drawings to perfect any project. He cherished time being around his co-workers, especially their employee pot luck dinners where he was known for his gumbo.

He was a pet lover, especially being around the family dogs, and volunteered his time at the Kansas City Zoo.

Austin loved to keep his mind and hands busy. In his free time, he enjoyed reading and tinkering on small machines, especially pin ball machines. He had a love for the outdoors and always cherished time on the Chinn family farm in Clarence, Mo. His dream has always been to retire to a rustic log cabin that he designed in the woods. When he was younger, he enjoyed fishing with his Grandma Maiden. Recently, he has spent a lot of time in his herb and salsa garden and playing fantasy football with friends.

Austin will always be known for his big heart, giving nature and approachable demeanor. He greeted all with a smile and was willing to do anything he could for others. You could hear his laughter from across the room.

Due to the COVID-19 pandemic, a private memorial service will be conducted in the Freeman Chapel on Friday, May 15, 2020 with Mr. Rick Yoder officiating.

A webcast of the memorial service will begin at 3:00 p.m. Friday, May 15, 2020 for friends to view by going to the "photos and videos" tab on this memorial page and scrolling down to the webstreaming link. Friends may mail sympathy cards to the funeral home or leave online condolences to be given to his family.

In lieu of flowers, memorial contributions are suggested to the Center for Research on Biotoxin-Associated Illnesses (CRBAI), 500 Market Street, Suite 103, Pocomoke City, MD 21851 or by giving online at this memorial fund for CRBAI: https://www.gofundme.com/f/austin-chinn039s-memorial-for-toxic-mold-research?utm_source=customer&utm_medium=copy_link&utm_campaign=p_cf+share-flow-1

To send flowers to the family or plant a tree in memory of Austin G. Chinn, please visit our Heartfelt Sympathies Store.

Receive notifications about information and event scheduling for Austin

We encourage you to share your most beloved memories of Austin here, so that the family and other loved ones can always see it. You can upload cherished photographs, or share your favorite stories, and can even comment on those shared by others.

Cory Hansen, Damian and Courtney Bahr, and other have sent flowers to the family of Austin G. Chinn.
Show you care by sending flowers

Posted May 15, 2020 at 05:48pm
Thank you for sharing the family memories and pictures of your baby boy who turned into a great man. I was very blessed by the grace of God to have known Austin in this life.
God bless you Chinn family,
Brent Wingrath

Posted May 15, 2020 at 05:09pm
My heart and love goes out to the Chinn family. I am a co-worker of Austin and we attended a religious fellowship with him, as well. He was a very interesting, friendly, happy and good fellow. I liked him a lot and will miss him SO much. I would come and visit with him, finding out about his canned goods, peppers, and to hear about helping his sister. I am a lowly drafter, but he would take time with me. I felt he was a good friend. I enjoyed his laugh. God bless all of you and may your hearts heal quickly and live a good life.
Comment Share
Share via:
RB

Posted May 15, 2020 at 04:51pm
Kathy, Bruce and entire Chinn Family....there are no words to express the sadness I feel in my heart for you....please know that you are in my prayers, and have been since I first heard of Austin's passing. I wish there was a way to ease the pain.....

Posted May 15, 2020 at 04:19pm
Austin and my husband, Brian were long time co-workers and friends. I was lucky enough to get to know Austin over the years. What a wonderfully kind And positive light in the world. He will be deeply missed. Condolences to all of his loved ones. 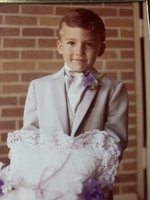 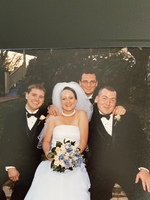 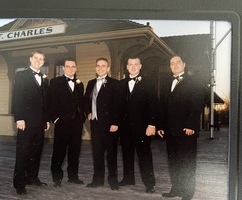