To share your memory on the wall of Dr. Rex Hardman, sign in using one of the following options:

Provide comfort for the family by sending flowers or planting a tree in memory of Dr. Rex Hardman

Provide comfort for the family by sending flowers or planting a tree in memory of Dr. Rex Hardman

He was born on November 14, 1938 in Glenwood, IA, the son of Carl Rufus and Nella (Swan) Hardman. He was married on May 9, 1981 in Kirksville, MO to Jodi Kay Hopkins who survives in the home.

Rex practiced as a general surgeon for 28 of his total 42 years in the field of medicine. He owned Hardman Medical Services and performed countless surgeries through Grim-Smith Hospital in Kirksville, MO, which was purchased in 1973 by him and four other osteopathic physicians. Rex retired in 1996 and endured nine years of retirement in Colorado and Florida. After failing retirement, in 2005, he accepted a position as Medical Director with Correctional Medical Services now known as Corizon Medical Services in Jefferson City, MO providing medical care at Jefferson City Correctional Center, Algoa Correctional Center, and Tipton Correctional Center. Rex was a thorough, trustworthy, and dependable surgeon and was well known for his outstanding surgical abilities. He held high standards and was well received and respected among his colleagues and associates. Rex left a lasting impression with all whom he interacted.

Rex was a lifetime member of the American College of Osteopathic Surgeons (ACOS), certified in the 70’s and becoming a fellow in 1987. He was a member of the National Commission on Correctional Health Care (NCCHC) since 2008, an organization dedicated to improving the quality of health care in jails, prisons and juvenile confinement facilities. He also was very proud to have received his certification in correctional health professionals (CCHP) through their national organization Academy of Correctional Health Professionals (ACHP).

Rex was a man of faith and his life was lived to help others. In addition to his career in the United States, his medical knowledge and skill was utilized on mission trips to India and Honduras. Rex enjoyed learning new things and even learned to snow ski with his son, Karl, in the 70’s, an activity he enjoyed as recently as February of this year. He and Jodi learned to fly in 1984 owning planes until 1987 but never losing the desire to fly. He also loved to play cards – gin was the game of choice but bridge was a close second; and you never wanted to play Monopoly with him, just ask Jodi. To Rex, a day on the golf course was a social event and a lesson in perseverance. He was happy as long as he didn’t have idle hands. Whether it was gardening, manicuring his lawn, hunting or fishing, Rex found something to occupy his time. Though he maintained a busy lifestyle, Rex was always able to slow down long enough to appreciate things like the beauty of the leaves changing in the fall, the tulips and the daffodils in the spring, feeding his birds, and the importance of the love of family and friends. Rex cherished his family. He was proud of his children and grandchildren and did his very best to be in attendance for a lot of events in which they participated. He will be remembered for being a loving, supportive and encouraging husband, father, grandfather, surgeon, and friend.

He was preceded in death by his parents; two sons, Brad Hardman and Tim Hardman; two brothers, Wayne Hardman and Wendel Hardman; one grandson, Kevin Hardman; and one brother-in-law, King Moore.

A memorial service will be conducted immediately following the visitation at 2:00 pm with the Reverend Angela Madden and the Reverend David Henry officiating.

In lieu of flowers, memorial contributions are suggested to the First Presbyterian Church.

To send flowers to the family or plant a tree in memory of Dr. Rex Hardman, please visit our Heartfelt Sympathies Store.

Receive notifications about information and event scheduling for Dr. Rex

We encourage you to share your most beloved memories of Dr. Rex here, so that the family and other loved ones can always see it. You can upload cherished photographs, or share your favorite stories, and can even comment on those shared by others.

Bill and Pam Milani, Scott and Angie Fenwick, and other have sent flowers to the family of Dr. Rex Hardman.
Show you care by sending flowers

Posted Apr 20, 2020 at 06:52am
Rex was my uncle .In my ❤️ heart he was and will forever be my "Yak". My condolences to all who had the honor of knowing respecting and loving him.
Comment Share
Share via:
G

Posted Nov 25, 2019 at 04:12am
I knew Rex since he was a resident in surgery. I worked with him for many years in the prison system while with CMS. I trusted his judgement with great confidence whenever there were questions about surgical necessity in many cases. He was a kind and straightforward doctor and I was very fortunate to have his wisdom and experience to guide me in making decisions about medical necessity in our prison population. He was truly a doctor with wisdom and integrity and made my job as VP of Medical Affairs in CMS making decisions about patient surgical needs versus wants objectively determined. Thank you Rex, I wish we had more like you today in a system driven by profit over medical needs. Gary Campbell DO retired.
Comment Share
Share via:
MS

Posted Nov 22, 2019 at 11:52pm
I have fond memories of Karl as I was his first grade teacher at Greenwood Elementary in Kirksville. He was any teacher’s dream student. Also have had surgery with Dr. Hardman as the surgeon which was a comfort at a difficult time. My husband and I extend our heartfelt sympathy to the family and assorted loved ones.
Marilyn and Robert Schoonover
Comment Share
Share via:
BM

Posted Nov 22, 2019 at 10:57pm
Please accept our most heartfelt sympathies for your loss... Our thoughts are with you and your family during this difficult time.

Bill and Pam Milani purchased the The FTD Comfort Planter for the family of Dr. Rex Hardman. Send Flowers 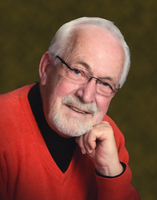