To share your memory on the wall of Jo Frappier, sign in using one of the following options:

Print
Jo Henri Frappier, 87, peacefully passed away surrounded by his loving family at home in Trinity, Florida on January 23, 2019.

Jo was born August 8, 1931 in Milwaukee, Wisconsin; the son of Francis and Dorothy Frappier. Jo grew up in Br... Read More
Jo Henri Frappier, 87, peacefully passed away surrounded by his loving family at home in Trinity, Florida on January 23, 2019.

Jo was born August 8, 1931 in Milwaukee, Wisconsin; the son of Francis and Dorothy Frappier. Jo grew up in Bryan, Ohio, where at a young age, he began working at several of the family's businesses. He earned his Bachelor's Degree and a Master of Business Administration from Indiana University. He served in the United States Marine Corps as an Engineering Sergeant in the Korean War from 1952-1953.

Jo had a distinguished career in business and politics. He started his career at Laclede Gas in St. Louis in 1958, where he conducted systems work, accounting, and budgeting. His first taste of public service was as PTA President at his daughter's elementary school in 1962. He ran for Florissant City Council in 1963 and served until 1966, when he was elected to the Missouri House of Representatives. He served four terms and went on to serve two terms as State Senator. In 1977, he created Royce Automotive Inc., then sold his interest in the business in 1983. In 1981, he served as the Director of Economic Development under Governor Christopher "Kit" Bond. He was also an aide and lobbyist on Governor John D. Ashcroft's staff. In 1990, he became President of the Missouri Chamber of Commerce and served until his retirement in 1998.

Jo enjoyed music, sailing, gardening, bird watching, golfing, traveling and spending time with family and friends. He attended First Presbyterian Church in Jefferson City and served as an elder. Jo will be remembered most for his wonderful sense of humor and kind heartedness.

Visitation will be held immediately before his memorial service at the First Presbyterian Church from 10:00 a.m. until 11:00 a.m. Saturday, April 13, 2019.

A memorial service will be conducted at 11:00 a.m. Saturday, April 13, 2019 at the First Presbyterian Church in Jefferson City, Missouri. Full military honors will follow his service. Private interment will be held in Tampa, Florida.

In lieu of flowers, memorial donations are greatly appreciated to the First Presbyterian Church in Jefferson City, Mo., St. Jude Children's Research Hospital or the Disabled American Veterans, three causes dear to his heart, are appreciated.

To send flowers to the family or plant a tree in memory of Jo H. Frappier, please visit our Heartfelt Sympathies Store.

Receive notifications about information and event scheduling for Jo

We encourage you to share your most beloved memories of Jo here, so that the family and other loved ones can always see it. You can upload cherished photographs, or share your favorite stories, and can even comment on those shared by others. 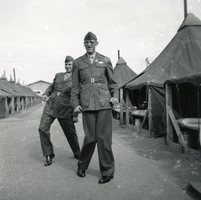