To share your memory on the wall of Ronnie Testerman, sign in using one of the following options:

Ronnie was born on August 6, 1944 in Joplin, Mo., the son Wave Testerman. He was married to Barbara Elbert... Read More
Richard Ronnie Testerman, age 75, of Jefferson City, Mo., passed away Sunday, November 24, 2019, at his home surrounded by family.

Ronnie was born on August 6, 1944 in Joplin, Mo., the son Wave Testerman. He was married to Barbara Elbert in Seneca, Mo. on October 1, 1966 and his two children were born from this marriage. Ronnie was united in marriage on September 1, 2019 in Jefferson City, Mo. to Debra Ousley Welschmeyer, after 22 years of being together.

He was a 1962 graduate of Seneca High School in Seneca, Mo. Ronnie was quite the athlete in high school and played football, basketball, baseball and ran track. He later attended a Water and Wastewater School, Crowder College in Neosho, Mo., Missouri Southern and Lincoln University. Ronnie earned an associate’s degree in Environmental Health which he later used in his career at the Department of Natural Resources.

He proudly served in the United States Navy and was stationed on the USS Henrico during the Vietnam War.

In his younger years, Ronnie worked at the Eagle Picher in Joplin, Mo and later worked for the City of Seneca as a water specialist. He moved to Jefferson City in 1976 when he began his career with the Department of Natural Resources as an Environmental Specialist. His primary responsibility was testing many of the streams and rivers in Missouri to ensure safe drinking water. He retired from D.N.R. after almost 30 years of service. He was also a lifetime member of the Missouri Water and Waste Water Conference. During his retirement he worked part time with Krehbiel’s Engineering in Camdenton, Mo. for several years.

Ronnie continued to be a sports enthusiast and played softball for Arris’ Pizza and Pizzeria Napoleonian for many years. He bowled on several leagues in and around Jefferson City and even met his wife at the bowling alley. Ronnie cheered for the St. Louis Cardinals, the Kansas City Chiefs, and enjoyed watching many Mizzou basketball and football games.

More than anything, Ronnie was a family man and loved spending time with his family, especially his children and grandchildren. Ronnie enjoyed being outdoors and cherished time with them fishing, camping and on their annual float trip. He always loved going back to Seneca and visiting the Elk Creek Stream. Ronnie will be remembered for his generous heart, amazing sense of humor and being able to light up a room with his presence.

Survivors include: his wife and partner of 22 years, Debra Testerman; his children, Lori Miller (Mike Brown) of Westphalia, Mo. and Russell Testerman (Lindsey) of Culver City, California; his step-children, Christopher Welschmeyer (Rebecca) and Robyn Brand (Jamey) both of Jefferson City, Mo.; his sisters, Nella Young of Corpus Cristi, Texas, and Phyllis Curtis of Seneca, Mo.; one grandson, Christopher Miller; one step-grandson, Trent Welschmeyer; a great-grandson, Alex Miller; and numerous nieces and nephews, including his nephew, Bobby Martin (Judy) of Seneca, Mo. that he thought of as brother.

He was preceded in death by his mother; his sister, Julia Robbins; his brother, Ernest Testerman; and a grandson, Michael Miller.

A memorial service will be conducted at 2:00 p.m. Saturday, November 30, 2019 in the Freeman Chapel with the Reverend Shane Crum officiating. Military honors will follow his services at the funeral home.

To send flowers to the family or plant a tree in memory of Ronnie Testerman, please visit our Heartfelt Sympathies Store.

We encourage you to share your most beloved memories of Ronnie here, so that the family and other loved ones can always see it. You can upload cherished photographs, or share your favorite stories, and can even comment on those shared by others.

Posted Nov 26, 2019 at 09:45pm
I have known Ronnie Boy, which was my calling sign for him since he came aboard the Henrico in 1963. we were friends then and still were after all these many years. I came thru Joplin several years ago when I was driving long haul and we shared some snow sleding near between Commerece Ok and Joplin and his Sister put a meal out fit for two kings and we spent that week end together and turns out a memory embedded forever. We spent about two years serving on the Henrico, played a lot of cards, learned a game called Uker and we became unbeatable partners. I'm so glad we had some time together in the corner of Okla and Missouri a long time ago, we laughed about his Sister letting us spend Civie time at their apartment in Oceanside, it was like being home to us.. sitting around listening to Ray Price music and sipping cold beers, it was our taste of home. Wish we could have made our planned get together this summer, we talked about it a few weeks ago and that will have to wait until join up with him in Heaven to get that visit in. He wasn't a Buddy, he was my friend and for those he leaves behind, you can add ole Ronnie Rambo to the list of family, he a Brother to me. He came by Midland, Tx after he got out of the Navy and spent a week end with my wife and I, even took him to an old Country dance and since I was playing in the band he got to hear every Ray Price song he ever recorded. RIP my Brother and Friend Ronnie Testerman, you were a Brother to me.
Comment Share
Share via: 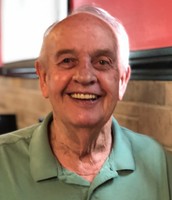