To share your memory on the wall of Ruth Clarkston, sign in using one of the following options:

Provide comfort for the family of Ruth Clarkston with a meaningful gesture of sympathy.

She was born on July 1, 1952 in Tuscumbia, Mo. the daughter of the... Read More
Ruth “Ruthie” Diane Clarkston, age 66 years, of Jefferson City, Mo. passed away Thursday, December 6, 2018 at Capital Region Medical Center, surrounded by her family.

She was born on July 1, 1952 in Tuscumbia, Mo. the daughter of the late John Wesley and Johanna “Jennie” Katherine (Holzer) Clarkston.

A lifelong resident of the Central Missouri area, Ruth attended grade school at Our Lady of the Snows Catholic School in Mary’s Home, Mo. She graduated from Cole R-5 in Eugene, Mo. in 1970. From there, she went on to work as a secretary with the Division of Employment Security. She was employed there until her retirement in 2005.

Ruth’s favorite memories were with her family and her pets. She enjoyed shows in Branson, Mo. and was a Cardinal’s baseball fan.

She was preceded in death by her parents; two sisters, Evelyn (Alfred) Thoenen and Louise Weed; two brothers, James “Jim” Clarkston and Charles “Charlie” Clarkston, one niece and two nephews.

To send flowers to the family or plant a tree in memory of Ruth Diane "Ruthie" Clarkston, please visit our Heartfelt Sympathies Store.

Receive notifications about information and event scheduling for Ruth

We encourage you to share your most beloved memories of Ruth here, so that the family and other loved ones can always see it. You can upload cherished photographs, or share your favorite stories, and can even comment on those shared by others.

Posted Dec 08, 2018 at 11:34am
My condolences to your family at this time of loss. I had the privilege of attending high school with Ruth who was always a lovely person. Sorry for you loss.
Comment Share
Share via: 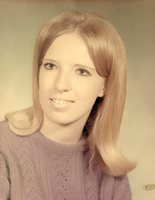