To share your memory on the wall of Ruth Shelden, sign in using one of the following options:

A lifelong resident of the central Missouri area, Ruth graduated from Jefferson City High School in 1957.

Ruth was employed as a professional cook for over 25 years until her retirement in 2004. During her tenure as a cook, she was employed with Memorial Community Hospital for the majority of her career, Villa Marie Nursing Home and retired from Kids Unlimited Day Care. She took her job seriously and probably had over 150 cook books at the time of her passing.

Ruth was a strong woman of faith and an active member of Cornerstone Baptist Church. Her faith provided the guiding principles of her life and she was active with Bible study groups. She loved the fellowship at the church and liked to help with some of the church meals and gatherings.

Ruth was an avid reader and used her cooking talents to make family gatherings and holidays special. She will be remembered for her giving heart and was dedicated to helping others. She was always there to lend a smile, her time cooking, or just make family and friends feel special.

She was preceded in death by her parents; three husbands; one son, Timothy Pierson; sister, Nettie Shelden; and brother, Don Ivie.

Funeral services will be conducted at 12:00 p.m. Saturday, January 25, 2020 at Cornerstone Baptist Church with the Reverend Brian Credille officiating. Private graveside service and interment will be at Kenner Cemetery.

To send flowers to the family or plant a tree in memory of Ruth Shelden, please visit our Heartfelt Sympathies Store.

Receive notifications about information and event scheduling for Ruth

We encourage you to share your most beloved memories of Ruth here, so that the family and other loved ones can always see it. You can upload cherished photographs, or share your favorite stories, and can even comment on those shared by others.

Jerry and Doris (Patterson) Bratten sent flowers to the family of Ruth Shelden.
Show you care by sending flowers

Posted Jan 20, 2020 at 11:02pm
Please accept our most heartfelt sympathies for your loss... Our thoughts are with you and your family during this difficult time.

Posted Jan 20, 2020 at 06:27pm
Such a dear lady I am going to miss her very much. My sympathy and prayers for Thomas and Kenny.
Comment Share
Share via: 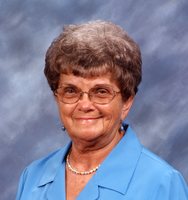