To share your memory on the wall of Winnie Goertz, sign in using one of the following options:

Winnie was born on March 19, 1942 in Austin, Mn., the daughter of Harold Aaron and Evelyn Irene (Burcomb) Thompson. She was married on September 27, 1959 to David John Paul Goertz, who preceded her in death in 2002.

Winnie had a very caring heart and was proud to contribute to the VFW, AARP, the Wounded Warrior Project, and St. Jude Children’s Hospital.

Winnie adored her family and spent her life as homemaker for her family. She especially cherished the family gatherings they all had together. Winnie enjoyed going shopping, traveling, and cooking. She also liked Winnie the Pooh, Elvis and her beloved dog bear Goertz.

Winnie was preceded in death by her loving husband; her parents; one son, Dean Goertz; three sisters, Alice, Sadie, and Evelyn; and two brothers, Billy and Cecil.

Private graveside services for the family will be held at a later date.

To send flowers to the family or plant a tree in memory of Winnie Goertz, please visit our Heartfelt Sympathies Store.

Receive notifications about information and event scheduling for Winnie

There are no events scheduled. You can still show your support by sending flowers directly to the family, or planting a memorial tree in memory of Winnie Goertz.
Visit the Heartfelt Sympathies Store

We encourage you to share your most beloved memories of Winnie here, so that the family and other loved ones can always see it. You can upload cherished photographs, or share your favorite stories, and can even comment on those shared by others. 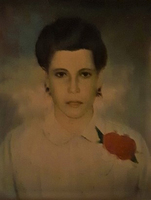