To share your memory on the wall of Lucille Gurney, sign in using one of the following options:

Provide comfort for the family of Lucille Gurney with a meaningful gesture of sympathy.

Lucille was a member of Concord Baptist Church since moving to Jefferson City, Mo in 2007. Lucille was a homemaker for the majority of her life and enjoyed reading, and solving puzzles, both word puzzles and jigsaw types, in her free time. She also had hobbies of crocheting and piecing together quilts.

A graveside service and interment will be conducted at 12:00 noon Monday, February 4, 2019 at the Vansant Road Cemetery, 1901 N. Vansant Road, Clinton, Mo., with the Reverend John Forsythe officiating.

To send flowers to the family or plant a tree in memory of Lucille E. Gurney, please visit our Heartfelt Sympathies Store.

Receive notifications about information and event scheduling for Lucille

We encourage you to share your most beloved memories of Lucille here, so that the family and other loved ones can always see it. You can upload cherished photographs, or share your favorite stories, and can even comment on those shared by others.

Posted Jan 31, 2019 at 02:16pm
Sorry for your loss. May the bereaved family find comfort through prayerful reliance on Jehovah, the God and Father of our Lord Jesus Christ. He is the hearer of prayer and the God of all comfort, who comforts us in all our trials. 2 Corinthians 1:3, 4; Psalms 65:2.
Comment Share
Share via: 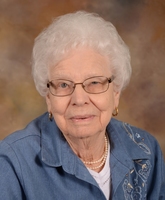